‘This would be very unwise’: Disbelief and fury in a week of Brexit

London’s latest move has dealt the biggest blow to relations between the UK and the EU, and Ireland, since the referendum to leave the bloc was passed in 2016 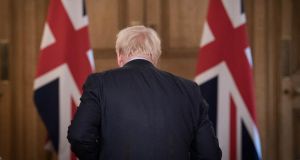 The confirmation that the British government intended to tear up a legally binding international treaty made headlines around the world. Photograph: Stefan Rousseau WPA Pool/Getty Images

Shortly after 9pm last Sunday – usually the quietest night of the week – Financial Times journalist Peter Foster published a story on the newspaper’s website that detonated a political firestorm that has raged all week.

Its content – that London was readying to breach the withdrawal agreement agreed with the European Union – has dealt the biggest blow to relations between the UK and the EU, including Ireland, since the referendum to leave the bloc was passed in 2016.

Foster, previously the Europe editor of the Daily Telegraph, is well-known in Dublin as one of the best-informed British journalists on Brexit. As the story went live, Foster posted links and tweets explaining the report. Within minutes, texts and WhatsApp messages flew around Dublin and beyond. Read the FT, they said. You’re not going to believe this.

“Jesus, it’s Foster,” thought one official. He knew the story was true. Here comes trouble. Trouble is right. The first deliberately-understated response from Dublin was via a tweet from Minister for Foreign Affairs Simon Coveney. He had spoken with Taoiseach Micheál Martin beforehand: “This would be a very unwise way to proceed,” Coveney declared. In private, the view was being put more colourfully.

Ministers and officials in Dublin were taken aback because they were completely ambushed. It is commonly assumed internationally that nobody is more suspicious of the British than the Irish, but this has not been true for a long time.

While Brexit has undoubtedly put a strain on relationships, the familiarity and collegiality established by a joint stewardship of the Northern Ireland peace process, and by common bonds of language and culture, has not entirely disappeared.

If either government is going to do something that affects the other, the convention has grown over the years that they let each other know in advance. But not this time.

By Monday, two responses in Dublin and Brussels dominated. First, disbelief. Was the UK really going to walk away from a treaty – one Boris Johnson negotiated and had hailed as a “great deal” – less than a year after he had signed it? Really? Then, anger.

The Taoiseach huddled with senior staff – Martin Fraser and John Callinan, chief of staff Deirdre Gillane – as a procession of senior Irish officials spent hours on the phones with contacts.

Sources say they have rarely seen such an immediate reaction from politicians, officials, aides and diplomats. There was, simply, fury at the British. Over the long-drawn out contortions that Brexit has wrought on British politics and statesmanship, from the flight of David Cameron to the slow, agonising decline and fall of Theresa May, to the shameless U-turns of Johnson, EU politicians and officials thought they had seen everything from their British interlocutors. Turns out, they ain’t seen nuthin’ yet.

Dublin’s initial response, conveyed to its EU partners was: wait and see. The legislation would come on Wednesday. The Irish had expected a “lively September”.

Sabre rattling by the British had been expected. The action that came was over-the-top, but something like it was predictable, people thought. This was all part of London’s negotiating hand.

They believed the British wanted a deal – though not, like the EU, at any costs – because it was so overwhelmingly in their economic interests to have one. However, if the British were going to play this game, senior officials told the Taoiseach, they were likely to play it out. In other words, they would not step back from it anytime soon.

The mood in Europe was still darkly furious. “There is general agreement across the EU,” one senior political source observed on Tuesday, “that they can go f**k themselves”. Another, not given to overstatement, said simply: “This is exceptionally serious.” Later that day, however, Martin spoke with German chancellor Angela Merkel and several other EU leaders. Merkel, characteristically, counselled caution: don’t burn any bridges; play the process out; don’t shut the door.

Weariness and strain were soon visible on the faces of the EU’s Brexit team. Usually controlled, Michel Barnier let his cool slip in meetings as he prepared to travel to London.

In one appointment just before he left “he was really upset” according to one source, “normally he is a diplomat”. French foreign minister Jean-Yves Le Drian pulled aside his counterpart Dominic Raab during a conference about Iran in London to warn him that violating the withdrawal agreement would be “unacceptable”.

As predicted in Dublin, the British were doubling down. In the House of Commons, the Northern Secretary Brandon Lewis – reading from a script, so no slip of the tongue this – confirmed that the government intended to publish legislation that would “break international law in a very specific and limited way”. Sitting in the chamber, Irish Times London Editor Denis Staunton later reported “none of us were sure we had heard him right”. But they had.

The confirmation in such stark language that the British government intended to tear up a legally binding international treaty it had concluded less than a year ago – while it was involved in trade negotiations with the same party to that treaty – made headlines around the world, and caused consternation in Westminster. The following day, when the legislation was published, senior Conservatives – including two previous prime ministers – decried the move, as did the former leader Michael Howard. This was not the sort of thing that British governments – Conservative governments – did. But under Johnson, it is.

Back in Dublin, Martin’s officials arranged a phone call with Johnson, during which the two men spoke for half an hour. Officials described the call as “forthright”; according to people briefed on the call, Martin laid out in strong terms the damage the British move would do to relations with the EU, and the threat it posed to Northern Ireland by blowing open the question of the border again. Do you not realise how this looks from our side, he asked the prime minister.

Johnson, sources say, was emollient, bordering on apologetic, insisting that no offence was meant, that he had his own domestic difficulties, that he wanted to continue with negotiations to reach a deal. But he was not stepping back. Later, Martin discussed the Johnson call with the European Commission president Ursula von der Leyen in their second call of the day. The EU response had taken shape by now: take a firm line on the UK’s legal obligations. But keep the talks alive.

The following day, Thursday, Michael Gove met European commissioner Maros Sefcovic in London for an emergency meeting of the EU-UK joint committee that has responsibility for overseeing and implementing the withdrawal treaty. In past meetings of the EU-UK joint committee, seven or eight EU member states have turned up to observe. On Thursday, all 27 showed up to follow the proceedings, in which DUP leader Arlene Foster is said to have lamented the handling of the plan and complained that the North was being used as a political football.

The EU position was predictable and plain, pointing out that the UK legislation breached the existing treaty and emphasising that the EU expected the UK would observe its legal obligations.

The UK should withdraw the legislation by the end of the month, the EU said, or the talks on a trade deal were in danger. Outside afterwards, Gove spoke to Sky News. “I explained . . . we could not and would not do that,” he said.

Meanwhile, Irish diplomats were working Washington hard, playing up the threat to peace in the North. The British had claimed that the legislation was designed to protect the Good Friday agreement, a suggestion that had the quality of chutzpah, if not veracity. “That’s bulls**t, and everyone knows it,” one senior official said, paraphrasing the line being pushed in the US.

A procession of Irish American politicians warned London that any backtracking on the provisions relating to Northern Ireland would see Democrats blocking a US-UK trade deal, the holy grail of the post-Brexit world for Brexiteers.

This could hardly be a surprise; Speaker of the House of Representatives Nancy Pelosi has said it before. This week, she said it even more clearly: “Don’t mess with the Good Friday accords.” Richie Neal, chairman for the powerful Ways and Means Committee, echoed her sentiments.

Yesterday, Dublin caught its breath after a hectic week. Most senior officials who spoke privately are sticking with their initial analysis: in the end, the UK will want a deal, because that is what is in the UK’s interests.

However, that opinion is held more cautiously by some people in Dublin, London, or Brussels now than it was last Sunday when they first saw Foster’s tweet.

So let’s see how this plays out, nevertheless. In the meantime, preparations for a no deal will acquire a new urgency. The Brexit countdown is on again; the great game is afoot once more.