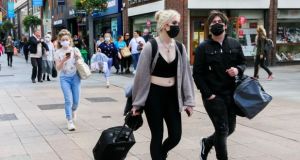 Rules on travel will change as the green list is being dispensed with. File photograph: Gareth Chaney/Collins

A: It’s a working title for the Government’s new mid-term plan on dealing with the ongoing coronavirus pandemic. It replaces the roadmap which came to an end in August and is intended to run until the end of spring 2021.

A: No it is not. The roadmap was designed to reopen society as the incidence of cases fell. By the end of June it looked to many as if the State had the virus licked and the reopening of society could be accelerated. However, by the end of July it was clear that the numbers were increasing again.

The reality now is that the virus will operate in waves, surging for a period, and then retreating. The new blueprint will be designed to deal with these situations as they arise, a little like the manner we now have codes to deal with extreme weather events.

Q: So it is a colour-coded plan?

A: No it is not. Plans for a colour-coded system were floated by Minister for Health Stephen Donnelly but were never published. The new plan will have five levels of alert to respond to the particular level of outbreak at that particular period. A little like the weather warnings, the entire State could be put on a particular level if there is a widespread uptick in cases.

Q: How will the levels system work?

A: Level Five would essentially be similar to the situation the State faced last March, where is a dangerously high surge in numbers and the reproduction rate is well above 1. That would require national lockdown and the kind of punitive restrictions on movement and contacts we saw in March and April. At this moment in time it looks an unlikely scenario.

Level One is the most benevolent climate where the virus is still present but the numbers are low but manageable. That might be akin to the situation that pertained at the end of June, where numbers were falling and the R rate was moving towards zero.

The Cabinet sub-committee on Covid-19 did discuss adding a sixth level, Level Zero, which would essentially describe a normal or pre-Covid Ireland. That debate was inconclusive as there were concerns that including it might give people a false hope.

Q: What level is Ireland at right now?

A: Level Two for most of the country and at Level Three for Dublin. The key indicators will be the fortnightly rate per 100,000 people (which shows the pattern of the outbreak) and the ‘R’ rate. There are relatively low number of cases but the restrictions we have at present apply.

There have been 1,068 cases in the capital in the fortnight and the rate per thousand is 79.3. There were concerns about Limerick and Kildare but the rates seem to be falling.

Additional restrictions will be imposed for higher levels. Already in Dublin,

We have seen new measures announced to reduce the number of families allowed in any one home during a visit to two (with a maximum number of six).

The Department of Health also announced the number of visitors per resident allowed into a care setting would be reduced from four to one. That is because while most of the new cases are occurring among younger people, it is now being passed increasingly to the over-65 cohort.

There is an important rider to this. There can only be two levels assigned throughout the State at any one time. So the idea of different counties having more than two different levels will not apply. If part of the State is at Level Two, and part at Level Three, no part of the State will have either Level Four or Level One.

Q: Will the measures be pre-ordained?

A: Partly. Some restrictions will automatically kick in when a region goes up a level. However, public health advice at that moment will also determine new or additional measures. It could be a total county lockdown like we saw in Kildare, Laois and Offaly or a more nuanced approach as we have seen in Dublin.

Q: Will this affect the opening of the “wet” pubs?

A: The reopening of the pubs is - excuse the pun - a hangover from the old roadmap. They were due to reopen on August 8th but that has been delayed twice. So the Government deciding to reopen the pubs is a legacy of the old plan, but of course it also plays into the new plan.

At this stage, it looks like the pubs will reopen on September 21st throughout the country. But they might not open in Dublin. What is going to happen is that the final decision will be taken in 10 days time on the eve of reopening.

If the rates in Dublin have stabilised the openings will go ahead. If not, there will be a tough call for the Government to take. Wet pubs comprise 35 per cent of all pubs in Dublin and have been closed for six months now. There is a huge determination in the Government to allow them reopen and a decision might have to be taken in the face of public health advice.

Ministers have argued if the outbreak in Dublin is emanating from clusters in homes, then public houses have little to do with it. There have been relatively few cases from the hospitality sector in the latest figures.

Minister for Arts and Culture Catherine Martin also wants music to be allowed in pubs through small bands and individual musicians to help the entertainment sector which has also been moribund. However, the National Public Health Emergency Team might gets its way on that one.

Music in a bar will automatically mean the noise levels go up - leading to raised voices and shouting - amid the patrons and in an enclosed space, that has been shown to facilitate spread.

Q: And what about sport?

A: One of the big blows in August was the reverse in the return of spectators to sporting events. Instead of the number allowed at outdoor games being increased from 200 to 500, it was decreased to 15, essentially creating a “behind closed doors” scenario.

It is certain some spectators will be allowed return from Tuesday when the plan will be released. That will allow a spate of county finals in the GAA to go ahead in front of spectators.

The numbers will increase on a phased basis. It’s likely that 400 to 500 people will be allowed into smaller grounds while the biggest stadiums such as Croke Park and the Aviva could be allowed 5,000. The numbers and timings have yet to be worked out, and there is still discussion on further increases down the line for the big IRFU, FAI and GAA games. But at least the change will be welcomed.

Q: And will travel abroad be allowed under the new plan?

A: Ireland has one of the most restrictive rules in the EU on travel. Those who arrive into Ireland from outside a tiny list of “green zone” territories must quarantine for 14 days.

The green list is being dispensed with. Instead Ireland will subscribe to the new EU “common colour code”. This is a traffic-light colour system. It will be based on data provided by the European Centre for Disease Prevention and Control.

Green will cover territories where the number of cases is low (less than 25 per 100,000 people in a 14-day period) and the percentage of positive tests is less than 3 per cent.

Those arriving from Red or Grey areas will need to undergo quarantine, or a test after arrival. Those travelling from Orange territories should undergo a test and fill out a passenger locator form.

While the European Commission will give Ireland the choice to quarantine those from Red or Grey zones, its preferred choice is they be subjected to a test. It remains to be seen what option will be chosen in the plan.

A: Yes, it will still exist. There is an obvious need for the expert group to continue in existence until a vaccine is found and the threat posed by the pandemic has receded on a global basis.

However, its direct relationship with the Government will change. A new oversight committee chaired by Government secretary general Martin Fraser will meet after Nphet meetings, discuss its findings and recommendations and then make its own recommendations to Government.

It’s a recognition that there was an absence of a buffer or a facility where Nphet’s findings could be talked through and then converted into something that would work in the political sphere.

As one seasoned observer put it: “Fraser’s committee will be the ones who will water the whiskey for the Cabinet.”