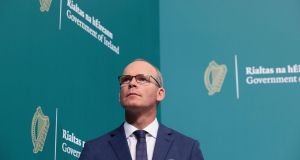 Minister for Foreign Affairs Simon Coveney: Irish officials are playing down the prospects of taking legal action against Britain under a treaty its government will have already undermined. Photograph: Julien Behal

Preparations for a no-deal Brexit are likely to be accelerated in the light of the British move to abandon sections of the Withdrawal Agreement this week, officials say, as the prospect of a breakdown of the talks looms later this month.

Minister for Foreign Affairs Simon Coveney briefed Cabinet colleagues on Brexit preparations this week, outlining two scenarios – one where a limited free-trade deal was agreed and the other where there was no agreement.

The latter outcome would involve – at least – significant tariffs on a range of Irish exports to the UK, while the question of Border checks depends on whether the UK abides by the terms of the Withdrawal Agreement of last year.

Senior sources say that following the UK’s move this week to introduce legislation which would set aside parts of the withdrawal treaty, it is unclear if the British government would observe the rest of the terms in a no-deal scenario. That could mean the question of Border checks arises again, officials concede.

Dublin was closely watching the emergency meeting of the joint EU-UK committee on the withdrawal agreement on Thursday and the EU commissioner leading the group, Maroš Šefcovic, spoke to Mr Coveney before the meeting. There was extensive contact between Dublin and senior EU figures afterwards, sources say. Senior Irish official Aingeal O’Donoghue sits on the committee.

The EU issued a statement afterwards, calling for the British government to withdraw the legislation by the end of the month, if not sooner.

The EU side also said it did not accept the British argument that the Bill aimed to protect the Belfast Agreement. “In fact, it is of the view that it does the opposite,” the statement said.

British minister Michael Gove, who led the UK team at the meeting, said afterwards he had told the EU side the British “would not and could not” withdraw the legislation. He denied the legislation was “an attempt to somehow set aside the Withdrawal Treaty or to shirk from the implementation of the protocol. Not at all.”

But there was continued condemnation of the British move in Europe and the United States.

In a statement, former president Mary Robinson said: “Respect for international law is critical for all member states of the United Nations. The United Kingdom, as a permanent member of the UN’s Security Council, has a particular responsibility to uphold and defend international law in all aspects of its domestic and foreign policy.

“The Withdrawal Agreement between the United Kingdom and the European Union is a carefully negotiated text which ensures the achievements of the Good Friday [Belfast] Agreement are locked into future UK-EU relations. No signatory should entertain any measures that could jeopardise the hard-won peace on the island of Ireland.”