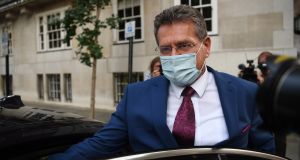 Britain has refused to withdraw a Bill that would break international law by overturning parts of the Brexit withdrawal agreement, despite a demand from the European Union to do so by the end of September.

At a hastily arranged meeting in London on Thursday, European Commission vice-president Maroš Šefcovic told cabinet office minister Michael Gove that the EU expects the letter and the spirit of the withdrawal agreement and its Northern Ireland protocol to be fully respected.

“The EU does not accept the argument that the aim of the draft Bill is to protect the Good Friday [Belfast] Agreement. In fact, it is of the view that it does the opposite. Vice-president Maroš Šefcovic called on the UK government to withdraw these measures from the draft Bill in the shortest time possible and in any case by the end of the month.

He stated that by putting forward this Bill, the UK has seriously damaged trust between the EU and the UK. It is now up to the UK government to re-establish that trust. He reminded the UK government that the Withdrawal Agreement contains a number of mechanisms and legal remedies to address violations of the legal obligations contained in the text – which the European Union will not be shy in using,” the Commission said.

Mr Šefcovic and Mr Gove were meeting in their role as co-chairs of the joint committee charged with implementing the agreement and they were joined by video link by representatives from the Northern Ireland Executive and ambassadors from the 27 EU member-states.

Mr Gove sought to reassure the EU that Britain remains committed to agreeing within the joint committee how the Northern Ireland protocol should be implemented but he ruled out withdrawing the Bill.

“Parliament is sovereign as a matter of domestic law and can pass legislation which is in breach of the UK’s Treaty obligations. Parliament would not be acting unconstitutionally in enacting such legislation. This ‘dualist’ approach is shared by other, similar legal systems such as Canada, Australia and New Zealand. Under this approach, treaty obligations only become binding to the extent that they are enshrined in domestic legislation. Whether to enact or repeal legislation, and the content of that legislation, is for Parliament and Parliament alone,” the British government said in legal advice on the Bill published on Thursday.

Michael Howard became the third former Conservative leader, after Theresa May and John Major, to condemn the government’s action.

Referring to Northern Ireland Secretary Brandon Lewis’s admission on Tuesday that the Bill would break international law, he said he never expected to hear such words from a British minister, much less a Conservative one.

“How can we reproach Russia, China or Iran when their conduct falls below internationally accepted standards, when we are showing such scant regard for our treaty obligations?” he told the House of Lords.

The eighth round of negotiations between Britain and the EU ended in London on Thursday with both sides saying that little progress had been made. Britain’s chief negotiator David Frost said that although there were some useful exchanges, differences on some important issues remain significant.

“We have been consistently clear from the start of this process about the basis on which agreement is possible between us. Those fundamentals remain,” he said.

“We have consistently made proposals which provide for open and fair competition, on the basis of high standards, in a way which is appropriate to a modern free trade agreement between sovereign and autonomous equals.”

EU chief negotiator Michel Barnier said the EU had shown flexibility in an effort to find solutions but Britain had not engaged on some major issues.