The burning of Bombay Street: ‘The start of the combustible years’ 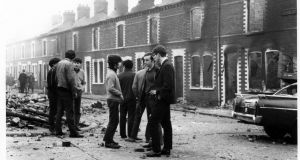 The aftermath of the burning of Bombay Street, Belfast, in August 1969. Archive photograph: Gerry Collins

On the night of August 15th, 1969, with tensions running high in the aftermath of the civil rights marches, a loyalist mob rampaged through Bombay Street in west Belfast, throwing incendiary devices into each home.

Community care worker Jean Canavan, now 65, was, at 15, the oldest child of one of the families forced out. The Canavans’ house was gutted. Until that point “we didn’t really know what sectarianism was”, she said.

The older residents had suspected something bad would happen, however. For weeks ahead of the house burnings, windows were being smashed on Bombay Street.

In the run-up to the traditional Republican commemoration of August 16th, some children, like the Canavans, and some of the elderly residents had been sent to the nearby parish hall at St Paul’s Church, or went to stay with relatives and friends elsewhere.

Everything changed then. At that age you should have been out enjoying life but after all that, you were kept in your own areas

On August 14th, republicans had exchanged shots with the RUC and loyalist gunmen along the nearby interface with the mainly Protestant Shankill area.

A daily diary kept at the nearby towering Clonard Monastery reported that by 8pm the following day “mobs came onto Bombay Street again, protected by guns, and began, one by one, to set on fire all that remains of Bombay Street”.

The contemporaneous chronicler, probably a priest, went on: “The soldiers were useless . . . they retreated and fired a tear gas bomb and there was silence for a while except for the crackle of 60 or so houses burning.”

It would be almost a year before the Canavan family would be able to return to their Bombay Street home.

After staying in the hall at St Paul’s, the children spent time with an aunt and then moved “from pillar to post”, said Jean’s sister, Patsy Canavan.

Assessing the impact of the event on their family, Patsy said: “It was terrible. Everything changed then. At that age you should have been out enjoying life but after all that, you were kept in your own areas.”

They even passed a winter in a caravan in nearby Beechmount.

“It was freezing. It wasn’t at all like what the mobile homes are now,” said Jean. “I remember the toothpaste was so frozen you couldn’t get it out of the tube.”

They were delighted to be offered their house back in Bombay Street when it was restored.

“You might have thought we had reservations about it, but we couldn’t wait. Our mum especially wanted back. She loved it here,” said Jean.

It really touched a nerve in the northern Catholic population

Even when an opportunity arose for the family to go to Australia, with their father, Jimmy, keen on the idea, their mother, Rita, ruled it out and the family has remained in the area to this day.

Massive steel and mesh wire cages still cover the back yards and gardens of the Bombay Street homes which back on to the huge “peace wall” on the Shankill side.

A year after the Canavans returned, a boy they know called John Short and his family also came back to the area, having been burnt out of their home in neighbouring Conway Street.

Still living in the place he is so attached to, Short told The Irish Times he would not want to see the peace wall come down or the cages removed.

“After a while you don’t really notice them. They don’t annoy us in any one way, I suppose you take them for granted,” he said.

“There’s talk about bringing the walls down but I wouldn’t want that. I don’t think the time is right yet. There is still too much stuff going on. And missiles still come over from time to time.”

The 1969 burning of Bombay Street came as the British army was being brought into the North, initially to supplement the under-strain RUC. The then leader of the opposition in Britain Edward Heath, who would become prime minister the following year, told the then west Belfast MP Gerry Fitt it would be much more difficult to bring the soldiers out again.

On the fateful night Fitt decided to take his wife and daughters to their holiday house in Waterfoot in the Glens of Antrim. He had planned to travel back but his wife Anne persuaded him to spend the night.

The next day, Methodist minister the Rev Sydney Callaghan who had helped set up the Belfast branch of the Samaritans, came across from his home in the Shankill and walked through the smoking shells of the Catholics’ houses. But it was too late for any cross-community “reach-out”.

A honeymoon period in which the Catholic nationalist community had viewed the British army as their saviours from loyalist mobs had been replaced by open hostility.

The fire-bombing of Bombay Street also helped lead directly to the formation of the Provisional IRA, splitting the republican movement and putting Gerry Adams, Martin McGuinness and others into the ascendancy.

Former Sinn Féin lord mayor of Belfast Tom Hartley recalled: “It really touched a nerve in the northern Catholic population, which I mean in the political rather than religious sense, and became the start of what I call the combustible years.

“The northern Catholic population were really caught in that moment, which was also seen in the context of the civil rights issue and were deeply traumatised.”