On this day 50 years ago: Loyalist mob burns down Bombay Street 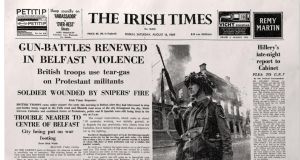 How The IrishTimes reported the day’s events the following morning.

British troops, having been deployed in Belfast for the first time yesterday, are attracting criticism for being unable to prevent large-scale destruction in several parts of the city.

Unidentified gunmen repel several attempts to burn the Catholic Monastery in Clonard but many other buildings do not survive the night. Intense street battles lead to homes being set on fire by loyalists in Conway Street, Kashmir Road, Clonard Gardens and in Cupar Street.

Most of Bombay Street is burned to the ground. Hundreds of families are left homeless as a result of the sectarian outrages, and there are harrowing scenes of people fleeing with what belongings they can seize. One of the youths defending the area, 15-year-old Gerald McAuley, is killed and there are scores of serious injuries.

Reports come in that David Linton, the 48-year-old Protestant father of three wounded yesterday during street disturbances in the Crumlin Road area, has died.

In Derry there are some signs of normality returning as people in the Bogside venture outdoors for the first time in almost a week. Shop staff also return to work having stayed at home to protect their families. There is a deceptive calm throughout the city but the scars of recent battles are in evidence everywhere – projectiles of all shapes and sizes, burnt out buildings, smashed windows.

British soldiers are manning barbed-wire barricades on all approaches to the Bogside to which only pedestrian traffic is permitted. Last night Bogside residents decided to set up their own police force to maintain order.

In anticipation of a joint British-Irish peace-keeping force in the North the Army’s First Line Reserves – numbering 2,000 and composed of former “regulars” who have returned to civilian life – have been called up. A military spokesman in Dublin says that the regular combined strength of the Army, Naval Service and Air Corps is 8,242.

The mobilisation announcement is made a few hours before the Minister for External Affairs Patrick Hillery meets Lord Chalfont and Lord Stoneham, junior ministers in the British foreign and commonwealth office and home office respectively, for what Whitehall describes as “long and serious talks”.

British officials are reportedly startled at the naiveté of Dublin’s proposal of a joint peacekeeping force, which Chalfont immediately ruled out. He promises to pass on Hillery’s request for an early meeting with prime minister Harold Wilson but does not comment on its likelihood.

The North’s prime minister James Chichester-Clark declares that Northern Ireland will not be forced out of the United Kingdom against its will. Attributing recent disturbances to “well-disciplined and ruthless men working to an evident plan” he stresses that “in the last resort our enemies face not only the determination of Ulster but the might of Britain”.

“I am in no doubt that Ulster faces today the most serious and malevolent threat in its history”, the prime minister says, before adding that “we will resist it by every means in our power”. Curfews are “very much under consideration” and he warns the Taoiseach “to mind his own business and keep away from the affairs of Northern Ireland”.

There has been widespread international reaction to the violence this week in Northern Ireland. One of Italy’s leading newspapers, Corriere Della Sera, blames those who planned and authorised an Orange Order parade of “provoking a minority which for centuries has been humiliated”. Another prominent Italian newspaper, La Stampa, editorialises that Northern Ireland resembles the American Deep South and questioned whether deploying British troops would provide “a truce or the spark of graver complications”.

Catalonia’s leading newspaper, La Vanguardia, claims the situation represents, once more, “the violent clash between British stubbornness and Irish passion”. Its editorial asks: “why did London and Belfast not realise sooner that things could reach this extreme?”, adding that unless Catholics were afforded equal rights they “will be compelled to legitimate and violent resistance”. It concludes that “Wilson’s government can no longer avoid its responsibilities”.

In an editorial entitled “The Sins of the Past” the West Berlin newspaper Nacht-Depesche attributes the cause of the present troubles to the unhappy division of the Irish nation in 1920: “Therefore it should not be surprising when the Irish demand the sending of a United Nations force to Northern Ireland, and even the reunification of Ireland”.

Highlighting Chichester-Clark’s dubious commitment to reform, the Frankfurter Rundschau claims that “it is more than questionable if he is the man who really understands the ‘Negros of Northern Ireland’ ”. However, the paper concludes that if he had learned a solemn lesson from the last few days “then at least the civil war would have yielded something beneficial”.

Developments in Derry and Belfast have also received widespread coverage in North America. Referring to this “dangerous war”, the Washington Evening Star claims “the Partition issue may become more acute than ever from this point on”. The New York Daily News urges Britain to accede to Dublin’s request for a UN peacekeeping force to be sent to the North as it might “do as well at halting conflict in Ulster as it did for some years in the Gaza strip”.

Radio Moscow says that having lost her colonies in Asia and Africa, Britain is seeking to “retain the Six Counties at any cost to prevent unification with the Republic”. The station, which closely reflects official Kremlin thinking, said that the British Government has proved itself incapable of solutions other than the “traditional methods of suppression and violence”.

The three morning papers in Australia’s largest city, Sydney, all carried front-page accounts of the Belfast riots. The Sydney Morning Herald describes the situation as “a tribal conflict not essentially very different from the wars between Ibos and Hausas in Nigeria”. It concludes that “the heady pleasures of tribalism, like those of alcohol, do not last long and tend to be followed by a king-sized political hangover”.

Donnacha Ó Beacháin is associate professor at the School of Law and Government, Dublin City University. He is author of the book From Partition to Brexit: the Irish Government and Northern Ireland