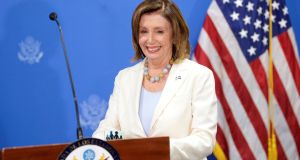 US speaker of the house Nancy Pelosi said that, whatever form Brexit takes, it ‘cannot be allowed to imperil the Good Friday Agreement’. File photograph: Reuters

House speaker Nancy Pelosi has undermined national security adviser John Bolton’s assertion this week that Britain will be at “the front of the trade queue” for a deal with the United States, putting Democrats on a collision course with the Trump administration over Brexit and Northern Ireland.

In a statement on Wednesday, Ms Pelosi warned that Brexit “cannot be allowed to imperil the Good Friday Agreement”.

“The Good Friday Agreement serves as the bedrock of peace in Northern Ireland and as a beacon of hope for the entire world,” she said.

“If Brexit undermines the Good Friday accord, there will be no chance of a US- UK trade agreement passing the Congress. The peace of the Good Friday Agreement is treasured by the American people and will be fiercely defended on a bicameral and bipartisan basis in the United States Congress.”

Her comments come in direct response to Mr Bolton’s assurances this week during a visit to London that the US is committed to striking a trade deal with Britain.

Ms Pelosi said that, whatever form Brexit takes, it “cannot be allowed to imperil the Good Friday Agreement, including the seamless border between the Irish Republic and Northern Ireland, especially now, as the first generation born into the hope of Good Friday 21 years ago comes into adulthood. We cannot go back.”

Her intervention echoes comments by the House speaker last month to The Irish Times following the appointment of Boris Johnson as prime minister that the Good Friday Agreement cannot be jeopardised by Brexit.

Her comments reflect a deepening chasm between the White House and the Democratically-controlled House of Representatives on the question of a future trade deal between Britain and the US – a key priority for the Johnson government.

US national security advisor John Bolton, who is a strong supporter of Brexit, said during a visit to Britain this week that the United States stands ready to sign a trade agreement with Britain, suggesting that a sector-by-sector agreement could be agreed. It follows a letter of support signed by 45 Republican senators last week to Prime Minister Johnson, underlining the United States’ commitment to a trade deal.

But any trade deal must be approved by both houses of Congress, and negotiations would begin in the House Ways and Means committee, which is chaired by the co-chair of the Friends of Ireland caucus, Richard Neal. With Democrats in control of the House of Representatives they have the power to block any trade agreement that overrides their red lines.

Congressman Brendan Boyle, a member of the Ways and Means committee, emphasised the importance of the Good Friday agreement as the trade negotiations get under way.

“Guarding the Good Friday agreement is paramount. Any Brexit deal that jeopardises the peace process will simply not be acceptable when it comes to trade negotiations,” the Pennsylvania congressman told The Irish Times.

Ms Pelosi’s intervention comes as Irish officials in Washington stepped-up engagement on Capitol Hill in an effort to outline Ireland’s position on Brexit in the wake of the letter signed by Republicans last week.

The letter was initiated by Tom Cotton, the Arkansas senator who blocked the passage of a bill to allow Irish citizens to access the E3 visa last year, a working visa only currently available to Australian nationals.

Invoking the words of Winston Churchill, the letter congratulates Mr Johnson on his appointment, pledging “unwavering support for the special relationship between our two countries as Britain leaves the European Union”.

It also commits to advocating for a new bilateral trade agreement with Britain “as early as your Brexit terms would allow, that reflects the centuries of open commerce between our nations”.

While it was signed by most Republicans in the Senate, no Democrats signed the letter.

During his visit to London this week Mr Bolton raised hopes that a trade agreement between the US and Britain could be agreed swiftly, even if Britain leaves the EU without a deal on October 31st. He suggested that both sides could “carve out some areas where it might be possible to reach a bilateral agreement very quickly, very straightforwardly”.

But trade experts have warned that such a deal will be difficult to achieve in reality.

While formal negotiations between Britain and the US cannot start until Britain leaves the EU, a joint working group has been meeting informally in Washington to discuss negotiating priorities.

The US has set out a number of objectives, including slashing tariff and non-tariff barriers on food and decreasing regulatory divergence – demands that many fear could allow chlorine-washed chicken or other controversial food products into the UK and are likely to be rejected by British negotiators.

“Bolton is offering a political and economic mirage and he lacks any authority to dismiss Congressional opposition to a proposed free trade agreement,” he said. Pointing to research by the Peterson Institute for International Economics, he said that trade agreements of this kind typically take a year and a half to negotiate and three and a half years to actually implement.