On this day 50 years ago: Six killed in North as British troops arrive 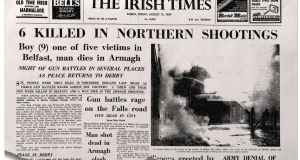 How The Irish Times reported the day’s events the following morning.

Six people are killed as battles rage throughout Northern Ireland. Violence spreads from the epicentre of Derry to other towns and cities including Belfast, Armagh, Omagh and Newry.

In Armagh, severe rioting breaks out as civil rights supporters emerge from a meeting at City Hall. Militant Protestants throw stones and the RUC riot police baton-charge the civil rights group into the Shambles, a predominately Catholic district in the city.

John Gallagher, a 29-year-old Catholic civilian and father of four, is killed by B-Specials, and two others are wounded in the attack.

Five of the six deaths occur in Belfast. The clashes have been particularly fierce along the streets that connect the nationalist Falls Road and loyalist Shankill Road. Protestant Herbert Roy (26) is first to die after republicans open fire on police and a loyalist mob entering the Catholic Divis Street area.

The RUC conduct sorties up and down Divis Street in armoured cars and fire indiscriminately into flats with machine guns, spreading terror among the local population. Nine-year-old Patrick Rooney is killed in his bedroom in the Divis Flats. The fatal bullet passed through two walls.

In north Belfast, where Catholics are a vulnerable minority, there are pitched battles as a combination of RUC, B-Specials and loyalist civilians try to advance into Catholic neighbourhoods. Two Catholics, bystander Michael Lynch (28) and Samuel McLarnon (27), who is in his living room, are shot dead by RUC members in Ardoyne.

Belfast remains extremely tense and barricades have been erected through large parts of the city.

The chairman of the Northern Ireland Civil Rights Association, Frank Gogarty, publicly appeals for help: “For Christ’s sake tell someone to intervene. Tell someone in Dublin. There will be another four hours of murder here.”

Relating how B-Specials were handing out rifles and revolvers to civilians on the Shankill Road, Gogarty says “there must be immediate intervention if more people are not to be killed by B-Specials and the Paisleyites they are leading through the Falls”.

The Irish Army has established five field hospitals along the Border. About 600 troops are now stationed there including veterans of UN missions in Cyprus and the Congo. The Army has also opened two refugee centres – at Finner Camp, Co Donegal and at Gormanston Camp, Co Meath. Among those accommodated at Gormanston is Annita Currie, wife of the Stormont MP for East Tyrone, Austin, who is with their year-old daughter.

The taoiseach’s television address has attracted widespread support throughout the country. In a statement on behalf of the Union of Students in Ireland, its Derry-born president, Ciarán McKeown, says: “USI calls on all Irish students and all young people who are free, to go North to assist the embattled minority, in this first stage of the final settlement of the Irish question.”

The Northern Ireland parliament is recalled and provides a venue for wildly conflicting views on the significance of recent events. Referring to the Republic, Northern Ireland prime minister James Chichester-Clark tells the assembly that “the government which seeks to wound us in our darkest hour” is “an unfriendly and implacable government” dedicated to overthrowing their state by any means.

When Austin Currie declares that “the people are getting off their knees” in what he called “an uprising”, the former minister for home affairs, William Craig, responds menacingly: “We shall defeat and put down this uprising. We have the capacity to do it, and the government to do it.”

He calls on people to serve in any force allied to the police. Criticism of the taoiseach’s speech prompts opposition MPs to exit the chamber. First to leave is republican Labour MP Paddy Kennedy who, describing Stormont as “a bloody farce”, announces he will not return until the RUC is disarmed and B-Specials disbanded. John Hume leads another six opposition MPs out of the chamber. As they leave, unionist MPs taunt “you are a joke” and “you will never learn”.

Earlier, the British prime minister Harold Wilson and home secretary James Callaghan meet for three hours at St Mawgan air force station in Cornwall during which a decision is made to dispatch British troops to Northern Ireland. The prime minister has been criticised for deciding to return to his holidays in the Scilly Islands.

The British Home Office says the troops have been deployed at the request of the Northern Ireland government to prevent “a breakdown of law and order”. During this “limited operation”, the troops will continue to be responsible to the UK government. The Ministry of Defence denies reports that Catholics are being left out of battalions sent to the North.

At 5pm the British army rolls into Derry and there is widespread relief and rejoicing when Lieutenant-Colonel Bill Todd orders the RUC and B-Specials to withdraw. The celebrations are muted by news of the killings in Belfast.

Nationalist Party leader Eddie McAteer describes the arrival of British troops as “the lesser of two evils”. The barricades remain intact and the Bogside is unpatrolled by the forces of Stormont or Westminster. To the outside observer it appears that this part of Northern Ireland, at least, has seceded from the state.

Donnacha Ó Beacháin is associate professor at the School of Law and Government, Dublin City University. He is author of the book From Partition to Brexit: the Irish Government and Northern Ireland.