The Troubles at 50: Rioting in Derry remembered by first-hand witnesses 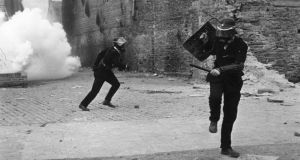 Police under attack during the civil rights demonstration in the Bogside area of Derry city. Photograph: Express Newspapers/Getty

To some, Billy McVeigh was the best rioter in Derry.

“I would never take that claim,” he emphasises, “but people insist on saying it.

“It was because I was always there and always up front. I used to do shifts and go home and get a sleep and come back again, it was like a full-time job.”

McVeigh’s image is instantly recognisable, though few outside Derry know his name. Of the murals which line Rossville Street in the city’s Bogside, he is the young rioter who stands, stone in hand, as an army vehicle trundles towards him.

It is a copy of a photograph taken in 1971; in August 1969 McVeigh was a 17-year-old rioter. “The adrenalin was unreal,” he remembers. “It was like going into a boxing ring.”

Tensions had been steadily increasing in Derry since the RUC’s attack on civil rights marchers at Duke Street the previous October 5th. Then, as now, the summer marching season was a flashpoint; community representatives in the Bogside met unsuccessfully with the leaders of the Apprentice Boys to try and get the 12th August march routed away from the area.

Already that year there had been significant rioting on the edges of the Bogside. In January the RUC had invaded the area, smashing windows and doors and shouting sectarian slogans, and in April they beat a local man, Sammy Devenney, in his own home; he died that July.

As the parade passed through Waterloo Place, on the edge of the Bogside, stones began to be thrown between local youths and the Apprentice Boys.

I knew about bad wages and jobs. You needed to have had blinkers on in Derry then not to realise what was happening

The situation rapidly spiralled out of control; the RUC staged a charge into the Bogside, followed by their supporters; by the afternoon the first petrol bombs were being thrown from the Bogside. That night, the RUC used CS gas for the first time.

“Everybody started building barricades,” remembers McVeigh, “and it was like a conveyor belt system making petrol bombs. There were people gathering bottles, people bringing crates, people coming with flour and sugar and petrol, all doing their bit and then passing them down to us on the front line.”

It became known as the Battle of the Bogside. “The electricity was there,” remembers Carmel McCafferty, “and it just needed to be ignited. It was like somebody had popped a balloon.”

A 21-year-old hairdresser, she would work all day, and then riot all night; “I had two sets of clothes, one for work and one for rioting. I didn’t go home, I hid my [rioting] clothes at the bottom of the flats.”

French students came to show them how to make petrol bombs – “they told us not to throw them, to lob them”, says McCafferty.

You just knew you were part of something bigger, that this was going to change history

When the Battle of the Bogside began, she says she realised a war had begun. “This name we give it, the Troubles, it was war. There’s no other way to put it. This was war.”

Nobody was killed in Derry in the Battle of the Bogside; the unrest spread to other parts of Northern Ireland, including Belfast, where seven people died between August 14th and 15th.

“There were lots of times we thought the area might be overrun,” says Eamonn McCann, the veteran campaigner and journalist who was then in his 20s.

“Looking back on it now, it’s easy to say it lasted 48 hours and then British troops came in, but it wasn’t at all clear at the time that that was the way it was going to resolve itself.

“In the middle of it all there was [the taoiseach] Jack Lynch coming on the television to say we won’t stand by, and it was genuinely believed by a lot of people that the Irish army was going to march into the Bogside from the Letterkenny Road.”

Foreign students were billeted in the GAA ground, Celtic Park; McCann and others were sleeping on the floor of his friend Dermie McClenaghan’s mother’s house in the Bogside.

“I remember coming downstairs and Luke Kelly [of the Dubliners] was asleep with his head in the grate, his red hair darkened by the soot of Dermie McClenaghan’s chimney.”

“The only time that I felt fear,” says 18-year-old rioter Peter Moloney, “was when word came down that the B Specials were going to attack the Long Tower chapel. I went up, and they had their rifles with them and they attacked down the street.”

He and the other rioters ran, abandoning a crate of petrol bombs. “It was the only time I saw a shotgun,” says Moloney. “This guy with a shotgun said to me, ‘go up and get the petrol bombs, I’ll cover you’.

“I was mad enough, I went up and picked up the crate, but what I didn’t know was the army had just arrived. It was all over.”

On the 14th August, the British army was deployed on the streets of Derry. They would remain for almost 40 years.

McCann was among the first to speak to them. “The first thing I said was, ‘what are your intentions? What are you doing here?’ and as we were asking them they were unrolling coils of barbed wire.

“They said they were not coming into the area – we established that straight off – and that was important to the way we saw it because they put up a barbed wire barricade with the RUC on the other side of it, away from us.

“That was the RUC being kept out of our area, and that was a triumph.”

“The Bogside was effectively sealed off,” says Moloney. “The Liberation Fleadh afterwards was one of the best musical events ever, I remember lying on the roof of a block of flats very late at night, early in the morning, and listening to Luke Kelly, it was absolutely wonderful.”

Moloney now lives in London. A collector of Troubles memorabilia, he is back in Derry for the events marking the 50th anniversary of the Battle of the Bogside.

“There isn’t a drug that compared to the buzz from rioting,” he says. “You just knew you were part of something bigger, that this was going to change history, and I would say I was proud of having been there but it’s not about pride.

“The most important bit was that you were actually helping other people, people that couldn’t defend themselves. I was doing my bit for people I loved.”