Since performing their stories together during a peace process initiative, pair have become close 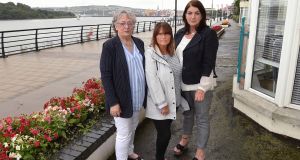 Kathleen Gillespie (left), Therese McCann (centre) and Anne Walker, who have all shared stories of their experiences of the Troubles through performance, pictured alongside the River Foyle in Derry. Photograph: Trevor McBride

On a rainy day in Derry, 69-year-old Kathleen Gillespie arrives at the city’s Playhouse theatre. As she shakes the raindrops from her coat and collapses her umbrella, she explains that her friend Anne Walker (50) will be running a few minutes late, as she has just dropped Gillespie off at the door to save her from walking through the downpour and has gone to park the car. Gillespie explains: “She takes great care of me. She looks after me everywhere we go.”

Their friendship is an unusual one, which would have been unimaginable in this city decades ago. Walker, who describes herself as a “former republican activist” and Gillespie, whose husband was murdered by the IRA in 1990, first met as part of a peace process initiative which sees former combatants and victims of the Troubles perform in theatre productions which tell their personal stories of the conflict.

Since being introduced a decade ago at their first rehearsal meetings for the Theatre of Witness, the women have become close friends. When Walker joins us, the pair are immediately laughing and joking.

Walker says that going into the room on the day that they met was “a terrifying experience”: “Of all the difficulties in my life, that was probably one of the scariest things I have done – but definitely one of the best things I’ve ever done. Because of what has come of that.”

Gillespie explains that when she joined the group, she was nervous about what to expect: “The first time I met Anne, I didn’t know about [her background]… I didn’t know which in the room was which. I didn’t realise we were going to become such good friends.”

Walker recalls how she was three years old when her uncle was killed on Bloody Sunday in 1972, changing her family’s life forever. Until then, her father had been working for the RAF, but handed in his notice “immediately”. They had been living in Wales, but returned to Derry the next day, moving into the nationalist Bogside area.

She recalls: “On two occasions policemen approached me and put guns right in my face. One was in the library where I worked and one was out on the street.”

She adds: “The policewomen were especially vicious. On two separate occasions, I can say I was molested. I was wearing a pop-open denim skirt, and one policewoman in front of about twenty policemen grabbed my shirt and ripped it open in front of them. It was harassment and humiliation.

“Another time, a policewoman bent me over the back of the car and searched me in a very provocative way – putting her hands everywhere and anywhere she could, in front of a policeman. This was pretty normal.”

Despite this, she says she and many other young girls in the Bogside still experienced some normality, including the hallmarks of a 1980s adolescence alongside the unfolding horrors of the conflict: “I did all the normal stuff as well like, loving David Bowie, loving music and trying to become a punk and then become a mod, and then become a New Romantic and listen to Top of the Pops.”

Walker says a turning point came, aged 13, when an older man she knew showed her a gun for the first time: “At that age, I was getting more and more republican and more and more wanting to do something about it. At 18, a fella approached me about becoming a republican activist.”

However, she says she soon began to feel uneasy: “Over the years I was involved [in republicanism], things happened and I saw things which didn’t sit well with me. I had a brain haemorrhage and I believe that was sort of a divine intervention – that was God saying ‘You can’t stop yourself, but I’m going to’.”

‘I needed an out’

She eventually left, moving to Limerick in search of a fresh start: “I’d had enough. I just couldn’t take any more of it. I needed an out.”

Although she lived just 10 minutes away in Derry city, Gillespie says her day-to-day life in the Troubles felt a million miles away from the Bogside. The Bishop Street area, where she had moved after meeting Patsy Gillespie at 16 years of age and marrying him aged 20, was much quieter at the time and escaped many of the horrors in the city.

I refuse to call myself Patsy’s widow. I’m his wife, I’ll always be his wife

However, that changed suddenly in October 1990, when masked IRA men arrived at the family home she shared with Patsy, their two sons and daughter. “They took Patsy away that night and they left men in the house, armed and masked men, with me and my family. They stayed with us from midnight to 4 o’clock.

“At 4am, the phone rang and the boys that were there ran out and we heard an explosion. Afterwards, we found out what had happened. Patsy was chained to a van, to the steering wheel and the pedals, and he was instructed to drive into the army checkpoint, where the bomb was exploded by remote control.”

Patsy had recently taken up a job at the army camp, after his own business had become bankrupt, meaning some in the IRA considered his life a “legitimate target”. He died in the explosion, along with five soldiers. Gillespie says: “I refuse to call myself Patsy’s widow. I’m his wife, I’ll always be his wife.”

She became involved in peace and reconciliation work in a bid to show an example for her daughter and teenage sons, who she feared could be radicalised into retaliating over their father’s death: “What brought me into the work that I’m doing now is that Patsy was murdered on our eldest son’s 18th birthday. I had to find a way to keep me sane and able to look after myself. I was very aware that the boys were at a very vulnerable age at which they could have joined any group going... So I started working with a lot of peace and reconciliation groups.”

She says her family initially had misgivings: “It’s just that my family were very concerned for me doing this because they couldn’t understand why”, and she did not expect to find a firm friendship: “I didn’t realise we were going to become such good friends.”

Where I’m at now is that life is better. I’m a completely different person. The fears have gone

Walker and Gillespie have performed theatre pieces based on their personal stories at playhouses around the world and now also give workshops in local schools to try to educate Derry’s younger generations about the Troubles.

They have performed alongside other women affected by the conflict, who have also shared their stories. These include Therese McCann, who grew up in a republican safe house on the Falls Road in Belfast in the 1970s, and speaks movingly in her performances of how the conflict engulfed her life day-to-day as a child, before moving to Derry as an adult in a bid for a fresh start.

Walker says that although she has found many of the conversations sparked by the theatre group deeply challenging, the engagement has marked a turning point in her life and processing her past: “Where I’m at now is that life is better. I’m a completely different person. The fears have gone. I’m not afraid to go into any community or speak to anyone.”

As their photographs are taken for this article, the women laugh as they realise they are wearing matching outfits, as Walker has borrowed a jacket from Gillespie’s wardrobe. As the rain eases off, the women share a joke with their arms around each other under the tentative sunshine, while they stand on Derry’s infamous walls.