Focus on nationalism will ‘sooner or later’ move Ireland towards fascism 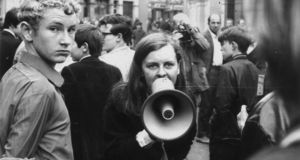 Bernadette McAliskey (centre) in Derry during the Battle of the Bogside. Photograph: Evening Standard/Getty

A focus on nationalism rather than internationalism will “sooner or later” take Ireland towards fascism, the veteran activist Bernadette McAliskey has warned.

Speaking on Monday night alongside fellow campaigner Eamonn McCann at an event in Derry marking the 50th anniversary of the Battle of the Bogside she warned “we need to get out of the nationalist conversation.”

“It’s increasingly narrow and sectarian,” she said, “and in a world where nationalism is hellbent on fascism it will sooner or later take us in the same direction.”

She also said that there was “no progressive nationalist agenda on this island at this time,” and asked, “Who in their right mind in a border poll would vote to join the Free State?

“Who in their right mind would join the existing Free State? Nobody. Well, not me anyway.”

Ms McAliskey was one of the leaders in the Bogside in August 1969, when rioting sparked by an Apprentice Boys parade spiralled into a three-day battle between the RUC and local rioters determined to keep them out of the area.

It ended with the deployment of the British army on the streets of Northern Ireland, and is regarded as one of the turning points of the Troubles.

Ms McAliskey said that the lesson of 50 years ago was that “spontaneity needed to be planned for.”

“I don’t think there’s any point in remembering or commemorating other than to learn from the past what we can do in the present to shape the future,” she said.

The “collective journey of pain and sacrifice that none of us knew of in the heady days of 69” was the price that was paid thereafter, she said.

Asked by a member of the audience about Brexit, she said “the fight for a better Europe is not a nationalist project”.

“These are international battles, this is a European collaborative battle of progressive forces, of working class people and not just in the economic interest of Europe but global interests in terms of climate change and refugees.

“I can tell you where the Border is,” she said. “The Border, the Border is in the accident and emergency unit of the hospital, is in the estate agents where people are looking for houses, is in the job centre, in the factory.

“What else would you expect from the capitalist classes of Ireland but that they would extol the virtues of the European Union?

“We who oppose that have got to find a united European platform for opposing it, and I think we’ll be left going out [of the EU] which leaves us further isolated from our European colleagues and the European trade union movement.