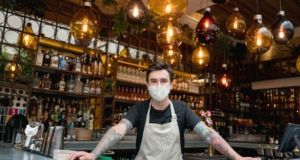 At a Cabinet meeting on Tuesday, the Government decided that pubs that do not serve food will remain closed until September at least. Photograph: iStock

The Government owes it to publicans to publish international evidence about the link between Covid-19 cases and pubs reopening, a Fianna Fáil TD has said.

Fianna Fáil Dublin South West TD John Lahart has urged the government to publish the advice cited by the State’s public health team in a letter to Minister for Health Stephen Donnelly.

In a letter to Government on Tuesday, acting chief medical officer Ronan Glynn said that “internationally, there have been a number of examples of outbreaks of Covid-19 in bars”. He cited a “Paper to Nphet” from July 14th in a footnote to the advice.

At a Cabinet meeting on Tuesday, the Government decided that pubs that do not serve food, known as ‘wet’ pubs, and nightclubs will remain closed until September at least. It represented a significant tightening of societal restrictions to curb the recent increase of Covid-19 cases in Ireland.

In a blow to the licensing industry, the Government decided to delay the already-paused phase four of reopening society for a further three weeks.

Besides pubs remaining shut until at least September 1st, the current strict limits of 50 on numbers congregating indoors, and 200 outdoors, will remain in place, a move that disappointed many sporting bodies and wedding venues. The numbers had been due to increase to 100 indoors and 500 outdoors.

“Publicans have prepared twice for the safe re-opening of their premises. They have spent thousands on ensuring that their premises meet public health guidelines and that their staff are protected,” Mr Lahart said on Thursday.

“Twice they have faced the devastation of being denied the opportunity to open safely – notwithstanding the fact that many of their industry colleagues have successfully managed to do so.”

“Gardaí actively monitor the situation daily, are welcomed by publicans and by patrons who are re-assured by the inspections. It appears that pubs with a food offering have safely managed their re-opening. Publicans, given the devastation they face, are owed the publication of this evidence cited by Nphet to the Minister.

“The house party alternative is already emerging, with no regard for any of the HSE and Nphet guidelines. No one wants a second lock-down. Publicans need to be given good reason why they cannot be trusted to open safely. As a consequence of non-compliance, they face the removal of their licence and a file being sent to the DPP.”

Asked about the decision to keep pubs closed at the present time, Mr Donnelly said this week that the evidence internationally shows that when countries open up the pubs, Covid cases increase.