South African president under pressure over ANC corruption in pandemic 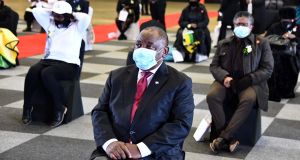 One of Mr Ramaphosa’s main political allies, the union federation Cosatu, has warned the African National Congress leader it will abandon his administration if tender fraud and nepotism allegations levelled against party officials recently are not addressed.

The online Daily Maverick newspaper has also alleged that companies owned by ANC secretary general Ace Magashule’s two sons had secured Covid-19 contracts worth €133,000 from the Free State’s provincial government, where he was premier until 2017.

Covid-19-related tenders have been awarded under questionable circumstances to politically connected company owners with depressing regularity since the first case of the virus was confirmed in South Africa on March 5th.

Public sector ombudsman Busisiwe Mkhwebane confirmed on Tuesday that her office has already received hundreds of tender fraud and service delivery complaints related to South Africa’s coronavirus outbreak, which has had 529,877 confirmed cases – the fifth highest in the world – and 9,298 related deaths.

The situation has prompted Cosatu to say the ANC under Mr Ramaphosa is still seen as a “rent-seeking, unaccountable caste”, and that the president must act decisively against members treating the pandemic as a tendering gold mine.

The union federation issued its stinging assessment after it emerged the ANC’s top decision-making body, its national executive committee, was unable to reach agreement last weekend about how to deal with corrupt members.

In the run-up to becoming president in 2019 Mr Ramaphosa promised voters he would clamp down on public sector corruption, which became endemic under his predecessor, Jacob Zuma.

But even though he has established inquiries since taking office that have produced significant evidence against many senior ANC officials, none of them has faced trial to date.

Addressing the Covid-19 scandal enveloping the ANC, Mr Ramaphosa told the public in his latest newsletter that he has authorised the Special Investigating Unit – an independent agency answerable to the presidency – to investigate all suspect procurement contracts.

But given the state’s poor record of holding corruption-accused politicians to account, many South Africans are questioning if these latest assurances can be believed.

Institute of Security Studies senior researcher Gareth Newham said although this latest wave of public sector corruption may well damage Mr Ramaphosa politically, it also provided him with an opportunity to live up to his promises ahead of next year’s local elections.

“Most public sector fraud currently under investigation happened years ago, so those involved have had time to cover their tracks. That is one of the reasons why so few people have been convicted to date,” said Mr Newham.

But he said that because the latest tenders under scrutiny were only recently awarded, “investigators have a much better chance to gather the evidence needed to hold people to account”.