August 6th, 2020: Dr Ronan Glynn has asked people living in Kildare, Laois and Offaly to "double down" on basic public health behaviours following a spike in Covid-19 cases in the region. Video: RTÉ 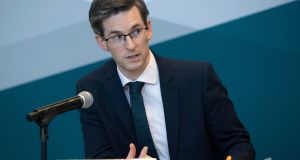 People in counties Kildare, Laois and Offaly have been warned to “double down” on public health guidelines following a “significant increase” in the number of cases of Covid-19 in those areas in recent weeks, as well as the emergence of two new clusters.

The warning came as the Department of Health said five more people have died from Covid-19 in the State and 69 new cases have been confirmed.

Four of the deaths confirmed on Thursday were delayed notifications.

There has now been a total of 1,768 deaths from the pandemic in the Republic, while the number of cases stands at 26,372.

In relation to the locations, 22 of the new cases are in Offaly, 19 in Kildare, 8 in Laois, 6 in Dublin, and 14 are spread across eight other counties (Clare, Cork, Donegal, Galway, Limerick, Louth, Meath and Wexford).

At a briefing from the National Public Health Emergency Team (NPHET) on Thursday, Dr Ronan Glynn, acting Chief Medical Officer at the Department of Health, said the rate of new cases in the midlands was a cause for concern.

“NPHET has been made aware of a significant number of additional cases in counties Kildare, Laois and Offaly,” he said. “These cases have been notified today and will form part of the case numbers tomorrow.

“While contact tracing in relation to these cases is ongoing, they come on the back of an already significant number of cases in clusters in these counties. Over the past 14 days, 226 cases have arisen in those counties. That represents 48 per cent of all cases over that period.

“People in these regions need to double down on the public health guidelines that are in place. It is strongly recommended that those over 70 in these regions limit the number of people they meet, remain physically distanced, and avoid public transport where possible.”

Dr Glynn said there were two more meat-processing factories where clusters have emerged. “One is in Kildare Town while the other is in Timahoe, Co Kildare,” he said.

“The locations of the factories are one thing, but clearly the people working in these factories commute from communities all around these areas, so there is a need for vigilance in all surrounding communities.”

Prof Philip Nolan, chair of the NPHET Irish Epidemiological Modelling Advisory Group, said the reproduction number for the virus is now estimated to be 1.8. This number reflects the number of people each person infected with the virus transmits it to.

A number below 1 means the virus is being controlled and will eventually die out, whereas a number over 1 means it is continuing to grow.

“A reproduction number of almost 2 is a serious concern,” said Prof Nolan. “Although we have not yet seen a significant increase in community transmission, there is a significant risk this could develop over the coming days and weeks.”

Dr Glynn also said there was a “need to keep community transmission low in order to ensure that schools reopen to the fullest extent”.

“We’re pleading with people, particularly in the context of what we’re saying this evening, that now is not the time. Now is the time to limit your contacts and act as you did back in February and March.”

Of the cases notified on Thursday, about two-thirds are under 45 years of age. Young people are not immune,” said Dr Colm Henry, chief clinical officer with the HSE. “We have seen serious illness among young people.

“But the more important point is that if it runs rampant among younger people, that will lead to uncontrolled transmission, which inevitably will affect those who have high morbidity from this illness. This is the big risk for society. We’re relying on social solidarity to protect the most vulnerable.

“We know what happens if there is uncontrolled community transmission. Even in the most developed hospital systems in Western Europe, difficult decisions are made in relation to admission to intensive care and intensive care is provided outside of intensive care settings.”

There have been five further deaths related to Covid-19 in the State and 69 new cases confirmed, according to figures released on Thursday evening by the Department of Health.

That means the overall death toll during the pandemic now stands at 1,768.

Northern Ireland has now gone 24 days without recording any Covid-19 deaths but, according to the latest figures from the North’s Department of Health, there has been a notable increase in the number of cases.

On Thursday afternoon the department reported that there were 43 new cases of coronavirus bringing the total to 6,049. That compares with the 10 new cases recorded on Wednesday and the eight cases on Tuesday. So far 150,953 people have been tested for the virus in the North.

Figures calculated by the Northern Ireland Statistics and Research Agency (Nisra) using information from death certificates, shows the total number of Covid-19-related deaths registered in the region to July 24th was 853. The departmental figures are based on patients having previously tested positive for the virus.