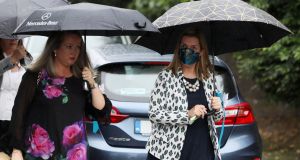 The CervicalCheck tribunal to investigate negligence in the State’s cancer screening programme will get under way in September to assess claims by women affected by the controversy.

Minister for Health Stephen Donnelly confirmed on Sunday that the tribunal would start next month but the exact timing would be a matter for the judges involved, he said.

Last Friday he announced the appointment of two new judges for the hearings – Ms Justice Ann Power, a serving judge of the Court of Appeals, who will be the chairwoman of the tribunal; and High Court judge Mr Justice Tony O’Connor. They will join Mr Justice Brian McGovern, the third member of the tribunal.

The tribunal was established to allow women affected by the controversy an alternative to going to court and was due to start in March but was delayed because of the coronavirus pandemic.

There are 203 active claims in relation to CervicalCheck along with eight that have been resolved.

Cervical cancer campaigners have raised concerns, however, that the tribunal will be an adversarial process involving confrontation between the women and the laboratories at the centre of the controversy.

Mr Donnelly said he was “very aware” that campaigners wanted a non-adversarial approach and “we’re going to do everything we can to make the process as amenable as possible to the women involved”.

Speaking on RTÉ’s This Week programme he noted that Mr Justice Charles Meenan, who recommended the tribunal, said it was “the best option available”.

But “the hope is that the three judges will very quickly see patterns in how these cases work and if there is an adversarial approach in this that it can be pulled back because we have to do everything we can to make this process as easy as possible for the women involved”.

He described it as a “novel approach” and they would closely watch how it works.

If the laboratories or the women decided to appeal the judgments to the High Court, “then the tribunal clearly won’t have been doing what we all hope it does”.

The scandal was sparked when Limerick woman Vicky Phelan, who has cervical cancer, settled a High Court action in April 2018 over the misreading of her smear test.

It later emerged that potentially hundreds of women were not informed of an audit that revised their earlier, negative smear tests.

The new judicial appointments will replace Ms Justice Mary Irvine and Mr Justice Michael Peart, who have dropped out.

Ms Justice Irvine did not take up her role because she was made President of the High Court in June. Mr Justice Peart did not give reasons for dropping out.

The tribunal was set up following Mr Justice Charles Meenan’s report on an alternative system for dealing with claims arising out of the CervicalCheck programme.