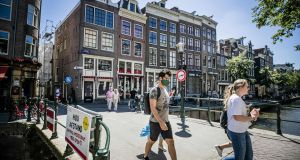 People in face coverings on a bridge of the Red Light District. Photograph: Remko de Waal/ANP/AFP via Getty

Dutch premier Mark Rutte has been forced to break off his holiday to deal with a rapid worsening in Covid-19 infections as a result of what appears to be widespread abandonment of obligatory social distancing, particularly among those under 40.

Statistics for the past three weeks have shown adherence to the regulations becoming increasingly lax, but the return of Mr Rutte and health minister Hugo de Jonge appears to have been prompted by a doubling in the number of infections in the week to Tuesday.

In that week alone, according to the public health institute, 2,588 people tested positive for the virus, almost twice the figure for the previous week.

The institute has frequently pointed out where increases in new cases have been matched by increases in the levels of public testing. However, during that week, as long-awaited summer holidays finally got under way, fewer tests were carried out, it said.

“The number of infections is increasing sharply, and the fact that it’s not stabilising is giving us cause for concern,” said the institute’s spokeswoman, Susan van den Hof. The surge in cases was “particularly evident” in Amsterdam and Rotterdam and, more recently, The Hague, she said.

The city authorities in both Amsterdam and Rotterdam made masks obligatory from Wednesday in busier areas, just a week after the government decided not to make them more widely compulsory nationwide. At the moment, they are mandatory only on public transport.

Pressure on the government has been increased by a scathing assessment of the situation from the umbrella body representing the country’s 25 regional health boards, which are charged with imposing and managing any local lockdowns.

“Instead of a reduction, we’re seeing a rise in infections in a wide range of social situations, at home, in cafes and in bars,” it warned as Mr Rutte returned.

“People are not keeping to the 1.5m social distancing requirement. Summer means we’re seeing more impromptu gatherings with increasingly close contact. There are also more organised events, such as weddings and funerals, at which the 1.5m rule is not being observed,” it said.

There’s growing pressure to introduce testing at Schiphol airport for holidaymakers returning from high-risk countries, combined with proper supervision of the 14-day quarantine, and restrictions on universities’ new-intake events.