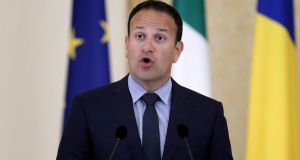 Taoiseach Leo Varadkar has said he is open to compromise in Brexit talks and to a possible extension of the March deadline for the UK to leave the EU.

He also insisted Ireland has “100 per cent” EU backing over its key demands in the negotiations.

Speaking in Bucharest, Romania, Mr Varadkar also sought to soothe fears that a no-deal Brexit could spark chaos, as Britain acknowledged having concerns about food supply if it crashed out of the EU in a disorderly fashion.

“In terms of us being unable to come to a withdrawal agreement ... I think anyone would appreciate that it would be preferable to have an extension than to have a no-deal scenario,” he said.

“There is provision in the treaties to allow article 50 to be extended, but that can only happen if it’s requested by the UK ... and as things stand they don’t [want it].

“On the balance of probabilities, I think we will be able to secure a withdrawal agreement in October ... but [failure to agree] is something we have to prepare for and it is something we preparing for as a country.”

A key sticking point is the “backstop” agreement reached in December, which states that, in the absence of another solution for the Border, Northern Ireland will effectively remain in the EU customs union, ensuring no hard border in Ireland.

Mr Varadkar said the presence of the backstop in the withdrawal agreement was “an absolute red line”, but insisted he was “always open to compromise” on less sensitive areas.

“Discussions are ongoing between the [EU] task force and the UK about that and as [EU chief Brexit negotiator] Michel Barnier says, we are trying to de-dramatise what is proposed because there are genuine concerns,” he added.

“What we’re really talking about is checks in airports and ports. And a lot of those checks already exist, around animal health and welfare ... and we have checks on issues such as excise and revenue.

“I hope we can get to a point where ... [unionists] accept that this isn’t an attempt to separate Northern Ireland from Great Britain in any way.”

Meeting Romanian leaders a day after talks in Croatia and before travelling to Italy, Mr Varadkar said he was not concerned that the EU could let Britain back away from a pledge to ensure there was no hard border in the North after Brexit.

“I’m talking to my European colleagues all the time, in the task force and EU institutions and prime ministers and presidents around Europe, and they’re 100 per cent behind us,” he said.

“Reasonably, as the deadline approaches people are asking harder questions and asking what will happen if there is no agreement, but I detect no departure from European solidarity whatsoever.”

Britain’s Brexit secretary Dominic Raab admitted on Tuesday that his government was making plans to safeguard food supplies in the event of a no-deal departure from the EU, days after he was reportedly told by Amazon’s UK manager, Doug Gurr, that such an outcome could spark “civil unrest” in the UK.

Mr Varadkar said such talk was “probably a bit over the top”.

“I’m not recommending that anyone should stockpile food or anything like that. We have plenty of food in Ireland.”

The Taoiseach said Ireland would not host a “controlled centre” where the asylum claims of refugees and migrants would be assessed, as the EU proposed to pay member states €6,000 for each person they accepted under the scheme.

“We are not planning on having any in Ireland. Ireland is not on the frontline when it comes to illegal migration,” he said, noting that the State had already pledged to take in 4,000 refugees from Greece and Italy.

“Any ‘hot spots’ or controlled centres must operate under the guidance of the [UN refugee agency] UNHCR and International Organisation for Migration, so that basic human rights and humanitarian standards are upheld.”