Judge Charleton will be replaced by Sean Ryan on Disclosures Tribunal 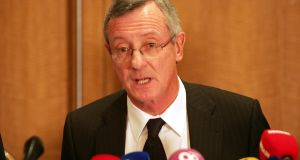 Peter Charleton, the judge presiding over the Disclosures Tribunal, is to leave the post and return to the Supreme Court on conclusion of the current module. He will be replaced by retired judge, Mr Justice Sean Ryan for future modules.

Mr Justice Charleton has always made clear that his module would deal only with the allegations by the Garda whistleblower Maurice McCabe that he was the victim of a smear campaign by senior gardai.

Hearings have taken place in recent months and a report is expected to be delivered in October.

Once completed, Mr Justice Charleton will return to the Supreme Court, and Mr Justice Sean Ryan, who retired from the Court of Appeal earlier this year, will be appointed to the tribunal, if the Dail votes its approval in the autumn.

Mr Justice Ryan will continue the tribunal’s inquiries into other allegations made of a smear campaign by other garda whistleblowers.

At a Cabinet meeting on Tuesday, the Minister for Justice Charlie Flanagan briefed his colleagues on the change. Later, in a statement, he expressed his gratitude to Mr Justice Charleton “for his sterling work since the establishment of the Tribunal and I look forward to his final report into these very important matters”.

Mr Justice Charleton has presided over lengthy public hearings on the allegations of a smear campaign against the whistleblower Maurice McCabe. The tribunal was told by the former garda press officer Superintendant David Taylor that he was instructed by senior gardaí, including two garda commissioners, to brief the media negatively about Sergeant McCabe in order to discredit his reports of garda malpractice. Both commissioners, Noreen O’Sullivan and Martin Callinan, denied the allegations.

A number of journalists called before the tribunal denied they had been negatively briefed about Sergeant McCabe. Some also claimed journalistic privilege over their communications.Other said they could not reveal their sources but confirmed that David Taylor did not smear Sergeant McCabe.

Mr Justice Charleton has said that he has to resolve a number of direct conflicts of evidence in his report.

In the course of tribunal hearings, Judge Charleton referred to the other possible modules - covered by paragraph P in the tribunal’s terms of reference - as “P for Parked”.

Mr Justice Ryan retired as President of the Court of Appeal in March of this year, a position he held since its establishment in 2014.

Prior to that, he was a Judge of the High Court. He also served as Chair of the Commission to Inquire into Child Abuse, which reported in 2009.