Government may fine firms over standards of decency online 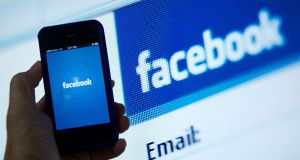 “We need to hear a response from Facebook and an explanation from them as to why they haven’t upheld their own standards,” Taoiseach Leo Varadkar says. Photograph: Karen Bleier/AFP/Getty Images

The Government is willing to consider introducing significant fines for online companies such as Facebook that fail to “uphold basic standards of decency”, Taoiseach Leo Varadkar has said.

Mr Varadkar was reacting to revelations about serious shortcomings in Facebook’s approach to violent and abusive material on its site.

These were revealed in a Channel 4 Dispatches investigation, broadcast on Tuesday, which showed trainee moderators at Facebook’s Dublin offices being told to leave disturbing content online.

Among the material was a video of a sobbing infant being kicked and beaten by a man. An image suggesting a girl whose “first crush is a little negro boy” should have her head held under water was also left on the site despite complaints.

Mr Varadkar – who last week said he believed technology companies were attuned to child safety issues – said it appeared Facebook had not lived up to its own “community standards”.

“The very least you expect is people to live up to their own standards,” he said, adding that Minister for Communications Denis Naughten will meet Facebook representatives in New York on Thursday.

“We need to hear a response from Facebook and an explanation from them as to why they haven’t upheld their own standards. Now we have to examine legislative mechanisms, whether we can bring in a system of fines to ensure that companies such as this uphold basic standards of decency. It is the worldwide web and it is international, but that is something we have to do.”

Given the size of companies such as Facebook, Mr Varadkar said any fines would have to be “commensurate” to have an effect.

“There is no point in having fines that could be easily absorbed. They would have to be large enough that it would hit the profits of the company and cause them to change their behaviour.”

The Taoiseach said, however, that regulation of such companies by one country alone may not work because the internet is global.

“Facebook has community standards and we expect them to uphold their own standards. The evidence produced by Dispatches is that they haven’t on all occasions. That would represent, in my view, a failure of self-regulation,” he said.

The Children’s Rights Alliance, the Irish Society for the Prevention of Cruelty to Children and CyberSafe Ireland all said the programme underlined the need for legislation to regulate internet service providers, saying self-regulation was insufficient.

Facebook’s public policy manager of content, Siobhán Cummiskey, said yesterday she knew people were “upset and concerned” by the revelations, adding the company had taken “immediate steps” to address the issues raised.