Tánaiste hopes reopening of pubs will be approved next week 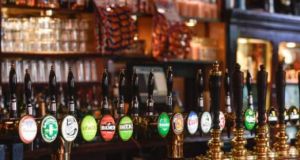 TDs said a package of supports was required to avoid the mass closures of pubs due to the pandemic. Photograph: Getty

Tánaiste Leo Varadkar says he hopes the Government will be able to decide on Tuesday to allow pubs reopen on August 10th but said he “can’t guarantee that at this stage”.

Mr Varadkar was responding to concerns raised by TDs in the Dáil about the viability of pubs who have said the lengthy closure was contributing to a “massive surge in home drinking and uncontrolled house parties”.

The Tánaiste said he would also like to see people “be able to attend outdoor gatherings, particularly football and hurling matches”, in reference to the current 200 spectator limit at venues including Croke Park, Semple Stadium and Páirc Uí Chaoimh.

The Cabinet will meet on Tuesday after it receives advice from the National Public Health Emergency Team (NPHET), to decide on whether the country can move to phase four of easing restrictions, “or something like phase four”.

Speaking about the possibility of pubs reopening, Mr Varadkar said: “I just hope that can be decided in the affirmative next week.”

Mr Varadkar said it would depend on the number of new recent cases and on “any particular or bespoke guidelines that might be put in place for particular sectors”.

Independent Galway TD Noel Grealish said publicans were worried they could not open properly until a vaccine is found and will require financial support to remain viable.

“Social distancing is extremely difficult to maintain in the pub setting but keeping pubs closed indefinitely is resulting in a massive surge in home drinking and uncontrolled house parties,” Mr Grealish said.

Many publicans are aged over 66, do not qualify for the pandemic payment and these pubs were already struggling to remain open before the crisis, he said.

In many cases they are the only social activity for people living alone and isolated, said Mr Grealish as he called for a “package of significant package for publicans to remain viable until a vaccine is found”.

Sinn Féin TD Thomas Gould said while social distancing for a lot of bars, especially smaller ones, is extremely difficult, they employ 50,000 people.

A package is needed to get publicans over the next 12 months. Otherwise “we will have mass closures of pubs” and they are needed in their communities.

The party’s finance spokesman, Pearse Doherty, asked if NPHET had been asked to advise on whether pubs could potentially open on the same basis as restaurants with social distancing, time limits and table service without having to serve food?

“This is particularly important for rural pubs where numbers at the best of times are low and in many areas pubs are the hub of their community,” he said.

The Tánaiste agreed that “pubs offer a huge amount of employment around the country and also are hugely important to our social fabric, not just in rural areas but in urban areas too”.

He said there is a substantial package in place already “but the problem is that pubs cannot open, he said. I just hope that can be decided in the affirmative next week.”

The package included no commercial rates for six months, a restart grant of between €4,000 and €25,000 for every pub, the wage subsidy scheme, a VAT cut of 2 per cent and the spend and save scheme, which will apply to food.

Mr Varadkar said the Cabinet will meet on Tuesday to decide on whether they can move to phase four “or something like phase four”.