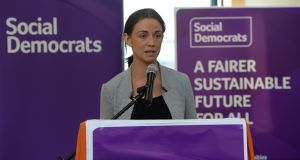 Holly Cairns: Maternity leave is not a perk or a pay rise but a human right. Photograph: Alan Betson / The Irish Times

Taoiseach Micheál Martin has pledged find a way to ensure TDs, Senators and county councillors receive maternity and paternity leave as politicians in other jurisdictions do.

He pledged to “follow that up” as he responded to a call by Social Democrats TD Holly Cairns for such provision.

“When I tell people this, they do not believe me. Maternity leave is not a perk or a pay rise but a human right.”

Raising the issue in the Dáil, Ms Cairns said the lack of paid maternity leave was a “glaringly obvious barrier for women entering politics”.

A Bill was introduced in 2017 to provide paid maternity leave for city and county councillors but has since lapsed, she said.

Fianna Fáil also introduced a Bill the following year, and it emerged that female TDs have to provide a sick note to have their babies.

Legal issues arose in a number of areas including whether the Dáil could legislate for TDs to be absent from duty.

Ms Cairns said “we have to ask if more women were at the decision-making table, this would be the case?

“If there were maternity provisions for female politicians, would there be more women at these decision-making tables?” she said.

“There are 36 female TDs and 124 male TDs. It’s an absolute disgrace,” she said, adding Mr Martin’s Fianna Fáil had returned five women out of a total of 37 TDs.

“We can’t scratch our heads after every election and wonder again why we haven’t achieved greater equality when there is this glaringly obvious barrier for women.”

Ms Cairns acknowledged there were complexities and it was an “unusual job”, but she called on the Taoiseach to make a commitment to find a way to provide councillors, Senators and TDs with maternity and paternity leave.

Mr Martin said “I will”, adding that “maternity and paternity leave should be provided as it is in other jurisdictions.

“ Politics should not be an exemption in that regard so I will follow up with you and keep in touch.”