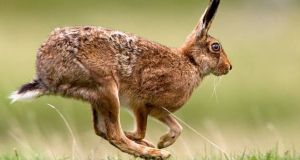 The Department of Heritage has responsibility for the conservation of hares, of which there are an estimated 250,000 in Ireland. Photograph: Getty Images

New cases of a disease deadly to hares and rabbits have been confirmed in the past week in four counties, prompting calls for a ban on coursing licences.

Rabbit haemorrhagic disease (RHD2) was first reported in Ireland last year, and affected hares in three counties and rabbits in 12 counties. It resulted in the suspension of coursing licences, but the decision was reversed after intense lobbying by rural TDs, when new licences were issued under stricter conditions.

Minister for Heritage Catherine Martin has confirmed that more cases were reported last week in wild rabbits from Clare and Cork, and in hares from Wexford and Kildare.

Ms Martin said the highly contagious disease “is known to have caused significant mortality among rabbits in parts of Ireland, and the spill over into both the Irish hare population and domestic pet rabbits raises additional concerns”. She was responding in a written parliamentary reply to Social Democrats TD Jennifer Whitmore.

Ms Whitmore, who also raised the issue in the Dáil, called for the issuing of licences to be suspended until promised research to establish the prevalence of the disease is carried out.

She said the hare is an iconic endemic species in Ireland, and pointed to instances of the disease in the UK in recent years where in some areas “up to 70 per cent of the population was wiped out”.

“Our hares are an iconic, endemic species of Ireland, and we cannot risk the population’s survival by the Government’s shortsighted capitulation to a ‘sport’ that should have been banned a long time ago.”

Minister of State Malcolm Noonan told her in the Dáil that a decision on licensing “is due in the next while”.

He said “we need to gather all the information, data and veterinary advice on this”, and a decision would be based on “the best available data”.

Licences allow coursing clubs to catch and net hares for coursing events in which greyhounds are all muzzled. The coursing season – and the licences – runs for three months from November until the end of February.

Previous cases of the disease had been identified in hares in Dublin and Wexford, and in wild rabbits from 12 counties: Carlow, Clare, Cork, Dublin, Kildare, Kerry, Leitrim, Meath, Offaly, Tipperary, Wexford and Wicklow.

The original RHD disease first emerged in China in 1984, and millions of animals were killed. A new and more virulent RHD2 strain emerged in France in 2010, and has been detected throughout Europe in hares and rabbits.

The Department of Heritage had previously promised research which would include testing rabbits killed by licensed hunters. It has responsibility for the conservation of hares, of which there are an estimated 250,000 in Ireland, and approximately two million rabbits.

Mr Noonan, a Green TD, said his party would have liked to secure a commitment in the programme for government to ban hare coursing, but “we have to do this based on science and the evidence before us”.