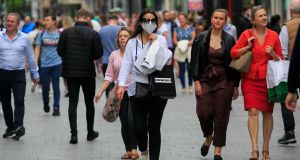 Garda would be called to enforce the mandatory wearing of face coverings in shops and retail stores only as a “last resort” when the regulations are introduced, Minister for Justice Helen McEntee has said.

The move to make face coverings mandatory on public transport from the start of this week had been “extremely successful,” Ms McEntee said on Friday.

“I spoke to the [GARDA]Commissioner this morning, and I think but for a few incidents the gardaí have not had to be called,” to enforce the regulations, she said.

On Wednesday, the Government said it would extend mandatory requirements for face coverings to shops and shopping centres.

Ms McEntee said house parties, which public health officials have linked to recent increases in Covid-19, “are not a new phenomenon, they have been happening for some weeks and months now at this stage”.

“We have seen the R-number increase in the last number of weeks and we need to ensure that it does not increase further, and that we reduce it again,” she said.

Officials estimate the R-number, which is the average number of people an infected person passes the virus onto, had likely risen to 1.4, but could be as high as 1.8. If the reproductive rate was at the higher figure Ireland could see more than 150 cases a day by 10th August.

The Government is to publish a “green list” of countries on Monday where people will not be required to self-isolate for 14-days upon their return from.

Minister for Foreign Affairs Simon Coveney has said it was unlikely the United Kingdom would be on the list, and the United States would not be.

Speaking in Dundalk, Co Louth, Ms McEntee said “we don’t have any certainty as to who will or won’t be on the list, that’s obviously being worked through at the moment.”

Dr Ronan Glynn, acting chief medical officer, has said the green list was sending “mixed messaging” to the public, given Nphet was advising against all non-essential overseas travel.

Responding to the comments Ms McEntee said the Government “are advising people against travel unless it is absolutely necessary, those guidelines have not changed.

“The green list essentially is saying where it may be safer for people to travel to if they have to, but again the guidance won’t change, we’re asking people not to travel unless it is absolutely necessary,” she said.

“When it comes to the two-week quarantine or now restriction of movement we’re asking everybody who comes into this country, and this applies to Irish citizens as well, to restrict their movement, the green list will allow for people to not have to do that,” she said.

She added the two week self-isolation requirement would still apply for anyone entering the country from overseas destinations not on the green list.

Minister for Children Roderic O’Gorman said Green Party leader Eamon Ryan falling asleep in the Dáil chamber during a vote on Thursday was a “moment of human frailty.”

Footage of Mr Ryan asleep in the chamber quickly went viral on social media on Thursday, and showed him being woken by chief whip Jack Chambers as his name was called to vote on legislation.

Mr O’Gorman, a Green Party TD, said: “It shouldn’t have happened and I think [EAMON]acknowledged that as much himself.”

The two Ministers were speaking after announcing €700,000 in grant funding, which will be available for LGBTI+ community groups and services.

The announcement was made at an event held by Outcomers, a Dundalk group set up in 1997 to support young LGBT people on both sides of the border.