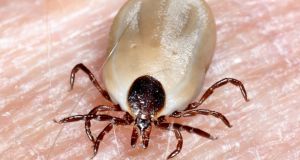 Lyme disease is a bacterial infection that is spread to humans by infected ticks.

The State’s first centre for Lyme disease is to open this month, amid continuing controversy over the way the condition is diagnosed and treated.

The Lyme Resource Centre is being opened in the Mater hospital in November to meet growing demand from patients as the number of suspected cases continues to increase.

Lyme disease is a bacterial infection that is spread to humans by infected ticks. The initial symptom is usually a red skin rash similar to a bull’s-eye on a dart board. If left untreated, further symptoms can follow including a fever, muscle pain, joint swelling and temporary paralysis of the facial muscles.

The HSE quotes an estimate of about 100 to 200 cases a year – including up to 20 cases of a severe form known as neuroborreliosis – but patient groups and some doctors says this is too low.

Dr Jack Lambert, the infectious disease specialist at the Mater setting up the resource centre, believes the number of cases is being underestimated, as many are being misdiagnosed as other disorders.

“It’s more common than we’re aware of. I think there may be thousands of cases of Lyme in Ireland,” he says, adding that he sees about five new or chronic cases of the disease each week.

Existing tests miss many cases, he believes, because they do not pick up all strains of the disease, and may also miss co-infections. “The current, approved testing misses many sick patients who are then told they should ‘live with it’.”

In addition, tick bites frequently go unrecognised, while less than half of patients who do identify a bite get the distinctive rash, he says.

“The tick bites you and you may not know; a week later you get flu in July. It spreads to every tissue of your body, where it can cause all sorts of different symptoms which overlap with other conditions.”

For these reasons, Dr Lambert argues, doctors should rely on a clinical diagnosis to identify cases, he says, as early diagnosis will prevent later complications.

The HSE agrees that if Lyme disease is diagnosed in its early stages, it can be treated with antibiotics and the outlook is excellent: “Most people will make a full recovery within a couple of days”.

Dr Lambert says the Irish approach is to “test and wait” whereas early treatment is required.

The antibody test for the disease is only 50 per cent accurate with many false negatives, he claims. “Making a diagnosis is difficult so you have to use clinical judgment.”

Because of underdiagnosis, some patients go on to develop a chronic form of the disease with severe symptoms such as fatigue, joint pain and heart infections, he says.

“We need to listen to the patients more. Just because we cannot ‘find’ Lyme with current testing, it doesn’t mean it isn’t there.”

The HSE’s health protection surveillance centre is drawing up a report on the diagnosis, surveillance and treatment of the disease, Minister for Health Simon Harris told the Dáil last week. Its completion has been delayed to take account of recent revisions in the UK’s strategy on Lyme, he said.

The Irish Blood Transfusion Service says it does not currently test for Lyme disease and has no plans to do so in the short term. Anyone with symptoms of chronic Lyme disease cannot donate blood.

No fewer than four groups have been established in recent years to advocate for patients with Lyme.