Ross tells US forum Wada has been ‘soft’ on Russian doping 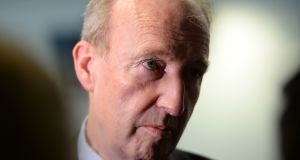 Minister for Sport Shane Ross has criticised the decision of the World Anti-Doping Agency to readmit Russia to the organisation. Photograph: Alan Betson / The Irish Times

Minister for Sport Shane Ross has criticised the decision of the World Anti-Doping Agency to readmit Russia to the organisation, as he attended an anti-doping forum in the White House on Tuesday.

Mr Ross, who was accompanied by the head of Sport Ireland, John Treacy, said that several “big-hitting countries” like Britain, the United States, Australia and New Zealand were aligned with Ireland on the issue and “are absolutely determined that this abuse, this misuse of drugs, this systemized use of drugs should not go on.”

Ireland was invited to attend the forum organised by the White House on reforming the World Anti-Doping Agency (WADA), which was established in 1999 to promote drug-free sport.

It follows the controversial decision last month by the agency to lift a three-year ban on Russia’s anti-doping agency which had been imposed after a scandal involving state-sponsored doping.

Asked if he was concerned about Ireland’s own reputation on the world stage following doping scandals, Mr Ross replied: “No.”

“We’re very very proud of the fact of what Ireland has done in terms of anti-doping — unashamedly and with a great deal of bravery found people guilty of taking drugs and have taken the requisite action. There are lots of high profile cases in Ireland on this and I think we’re very proud of that and we’d like other nations to follow our example.”

But he harshly criticised Wada for readmitting Russia.

“We’re here to make sure that we make it clear that the Irish Government is disappointed as is Sport Ireland with the decision to readmit Russia to the nations which are accepted as being against drugs,” he said.

“Wada has been soft on readmitting Russia and has betrayed its own principles on this.”

In particular, Mr Ross said that athletes in Ireland and across the world had been “completely let down” and he criticised the absence of athletes on the board of the agency.

In a joint statement issued after Tuesday’s White House forum the group of eight countries called for widespread reform of the agency. Noting that confidence in clean sport was at an “all-time low,” it said that there was “widespread disillusionment” with how the Russian doping scandal was handled.

“Athletes and sports fans across the globe have lost confidence in the commitment, resolve and willingness of Wada to stand up for the ideals on which it was founded.”

The statement called on Wada to run an “open and transparent process” regarding the anti-doping samples that are being collected from Russia and must be submitted before December 31st.

Tuesday’s forum in Washington is the latest international effort to stand up to the World Anti-Doping Agency amid widespread unease about the way it handled the Russian doping scandal.

Earlier this week in Paris the head of 18 anti-doping agencies, including Ireland’s John Treacy, held an emergency summit and condemned the recent Wada decision to readmit Russia. They also endorsed suggestions that the Wada’s executive board should be overhauled.

Russia was found guilty of a massive system of state-backed doping activity in 2015, leading to its suspension from the agency.

Russia’s own anti-doping agency based in Moscow was decertified. The IAAF, the world athletics’ governing body, also banned Russia’s track and field athletes from competing in international competitions following the scandal.