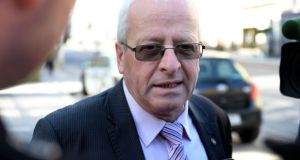 The Government has been accused of “dancing all over the Unesco Convention” because of the refusal to allow indoor step dancing classes through a ‘pod’ system.

Independent TD Mattie McGrath was All-Ireland set-dancing champion in 1974, and has been known to break into spontaneous jigs on the Leinster House plinth.

He made the accusation on Thursday as the country enters the fifth of six scheduled weeks of Level 5 restrictions because of Covid-19.

He compared dancing with sport and other activities, saying “sports are allowed to go ahead in groups and they can practice”.

The Tipperary TD said “teachers and dancers recognise the restrictions are necessary to curb the spread of Covid”. There were many dance schools offering very safe environments, he said, which were “well designed and very well ventilated.”

Calling for protection of the right to dance the Tipperary TD said it should be allowed indoors in pods and he accused the Government of “dancing all over the Unesco Convention” which protects intangible cultural heritage.

But Minister of State for Culture Jack Chambers insisted that “this Government isn’t dancing on anything related to Unesco and we absolutely support our cultural and dance schools”.

He said indoor sports were not allowed and at Level 3 sports were only permitted outdoors in pods.

Mr Chambers said no distinctions were being made in the guidance set out in the Government plan for living with Covid-19, which specifies that no exercise classes or dance classes are allowed at Levels 3, 4 and 5.

“This precludes any exercise class including gymnastics classes and any type of dance class - traditional, step, jazz or ballet.

The Minister added that the guidance also “precludes any indoor gathering taking place at Levels 3, 4 and 5 and make no exemptions”.

Mr McGrath said he had received 1,208 letters from dance teachers and pupils, including one from a six-year-old girl who wrote: “I miss dance. I love dance. Let us practice so we can dance, be happy and have fun.”

The Minister stressed that the Government “absolutely supports” cultural and dance schools. But, he said, “the most effective way to make sure many of our activities across society can operate is that we suppress the virus and get back to a situation where we can have a whole range of activities”.