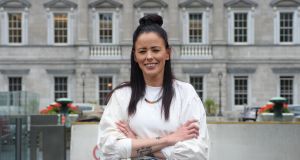 Senator Eileen Flynn said she was ‘honoured’ to take the chair of the Joint Committee on key issues affecting the Traveller community. Photograph: Alan Betson

Independent Senator Eileen Flynn was elected chair of the Joint Committee on key issues affecting the Traveller community on Thursday, making her the first person from her community to chair an Oireachtas committee.

She was nominated by Joan Collins TD (Independents 4 Change) and was not opposed.

The committee had been convened during the course of the last Dáil and was chaired by former senator Colette Kelleher. Ms Flynn said she was “honoured” to take the chair as the committee completes “unfinished work . . . to tackle the inequality and issues that impact on the Traveller community”.

Ms Flynn, who grew up in Labre Park Traveller housing site in Ballyfermot, Dublin, and now lives in Donegal with her husband Liam White and daughter Billie, was a nominee to the Seanad by Taoiseach Micheál Martin.

During the previous Dáil the committee examined a range of issues affecting the community, including housing, employment and educational issues, including the disproportionate application of reduced timetables to Traveller children.

It had been due to write and publish a report on its findings but had not yet done so when President Michael D Higgins dissolved the 32nd Dáil in January.