Miriam Lord: Taoiseach gets in a hoof as Mary Lou accuses Coalition of horse-trading 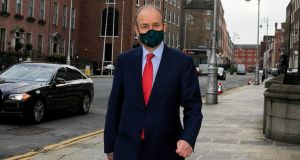 Did the Sinn Féin leader really just allege that “horse-trading” may have occurred during the painfully protracted negotiations between Fianna Fáil and Fine Gael to form a hitherto inconceivable and therefore hugely historic Coalition Government?

Steady there, Taoiseach. Smelling salts and a large brandy for Micheál Martin – stat!

In all his 31 years in the Dáil Micheál never heard anything quite so outrageous as the words uttered by Mary Lou on the floor of the temporary Dáil chamber in the Dublin Convention Centre on Wednesday. He was highly insulted, affronted and indignant on his own behalf and on behalf of the current Attorney General that she should even hint that the elevation of former FG AG Séamus Woulfe to the Supreme Court, and the decision to replace him with two AGs rotating in sync with rotating taoisigh, had anything to do with the Coalition negotiations.

Or “horse-trading”, as it is commonly known.

Such a terrible thing to allege and the Taoiseach was rightly scandalised. What next on the equine bombshell front? You wouldn’t put it past her to suggest next that Micheal D is adopting a Connemara pony from the nuns in Kylemore.

But there it was. Micheál Martin, slugging it out in the Leinster House bear pit for 31 years, man and boy, suddenly accused of indulging in some class of politicking.

The outrage happened at midday when Mary Lou resumed persecuting the Taoiseach and Helen McAbsEntee (the Minister for Justice still definitely not coming into the Dáil to explain why horse-trading over Government jobs, including legal ones, never, ever happened). The row started the day before over a selection process which saw Séamus Woulfe ascend to the Supreme Court despite never having been a judge, amid confusion over how Fine Gael Minister and Leo Varadkar loyalist McEntee came to recommend the outgoing FG AG as the new Coalition’s candidate for the Supreme Court.

In particular, she was anxious to continue Tuesday’s line of questioning, in concert with a very dogged Alan Kelly of Labour, on how three serving judges who submitted applications didn’t appear to get a look-in in terms of the process. Or perhaps they did – Kelly and McDonald simply wanted to know how the Minister managed the selection system.

Because for the life of them, they can’t work it out.

And this is why Mary Lou and Alan, as well-seasoned a pair political bruisers you are ever likely to get, are barging around the bleedin’ obvious with big innocent heads on them in an effort to embarrass the Government, and the Taoiseach in particular, over judicial appointments.

It’s not proving a difficult task, especially as Micheál Martin is vehemently arguing that Minister for Justice McAbsEntee should not have to appear before the Dáil to answer questions. Unfortunately for Micheál, he very publicly blew a gasket in the Dáil in 2017 when an outgoing AG was appointed to the Court of Appeal, demanding that the then minister for justice come before the Dáil with answers.

Words the Sinn Féin leader was only too delighted to throw back at him three years on.

She looked very pleased with herself when her efforts at Leaders’ Questions resulted in a techy Martin blatantly sidestepping the main thrust of her queries by concentrating on having a major fit of the vapours over her use of the word “horse-trading”.

“In the endgame of government formation talks between yourselves and Fine Gael, you announced that the position of attorney general would be rotated in line with that of taoiseach. So the attorney general position was central to your horse-trading. Séamus Woulfe, outgoing attorney general, long-term member of Fine Gael, was appointed to the Supreme Court.”

That tends to be the way these things happen, right enough. Although that is not to say it happened earlier this year when Micheál and Leo were deep in negotiations to form a government. It would be deeply unfair were cynical hacks to assume the two men driving the coalition talks reached an agreement on certain big jobs before shaking hands on the deal.

The Taoiseach (31 years a TD, man and boy) was livid at the mere thought.

“I want to say one thing at the outset,” he began in his chilly reply to Mary Lou. “Your assertion that there was horse-trading involved in the context of the appointment of Paul Gallagher as Attorney General and some connection to the appointment of Justice Woulfe to the Supreme Court, is an untruth and a false assertion.

“And you should withdraw it because it impugns the integrity and ability of the present Attorney General, who has had nothing to do with that.”

Nobody ever said the current Attorney General was doing the horse-trading. When you go to Tattersalls, you don’t see Dobbin sitting above the sales ring with his hoofs on the gavel.

Deputy McDonald dismissed the Taoiseach’s response as “incoherent gibberish”, a charge which Micheál could have verifiably dismissed as “an untruth and a false assertion”. It just wasn’t a very good reply.

She wasn’t convinced by his anger, and called on McEntee to explain how four names were whittled down to one, the selection criteria used and why she didn’t inform the Taoiseach and Green party leader (the Tánaiste hasn’t indicated if he was told) that three sitting judges also applied.

The Taoiseach explained that when he was told the independent Judicial Appointments Advisory Board (JAAB) deemed Séamus Woulfe a suitable candidate, “that was good enough for me”.

But Mary Lou pointed out he was well aware that the three judges had to apply through a different channel.

“That there was horse-trading around the position of attorney general is not only truthful, it’s a verifiable truth. It played out in the media, Taoiseach, between yourselves, Fine Gael and, let it be said, the Green Party.”

True. How to verify what went on in top-level government formation talks between two party leaders?

The Taoiseach was all riled up by these mentions of pre-coalition horse-trading.

“Stop misleading the House in that regard and deliberately, in my view, creating a story that has no foundation in fact,” he cried dramatically, conveniently ignoring the call for his Minister for Justice to address the Dáil.

And he sat down.

As for the media reporting on what may or may not have been horse-trading during the government negotiations, we did a quick look around and found quite a lot of it. Back in April, Business Post political editor Michael Brennan filed a piece headed “Plum role of attorney general up for grabs between FF and FG”.

He wrote: “The decision on the appointment is likely to be one of the final matters to be resolved before any new coalition between Fianna Fáil and Fine Gael is agreed. One possibility mentioned is that the party which gets to choose the attorney general will accept a smaller number of junior ministries. Another is that the position is rotated, so that Martin and Varadkar each have their preferred attorney general while they are in the office of taoiseach.”

Which is what they decided to do.