Social media and canvassing will be focus for anti-abortion campaigners 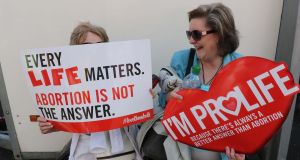 Marchers at an anti-abortion rally in Dublin in 2015. Photograph: Nick Bradshaw

Social media campaigning and on-the-ground canvassing will be the mainstay of the effort by anti-abortion groups to keep the Eighth Amendment in the Constitution.

The groups say they have made the decision because they feel shut out of the abortion referendum debate by much of the media and the political establishment.

“We never ever hear about the thousands of lives saved every year by the Eighth Amendment. We just never see that talked about,” says Cora Sherlock of the Pro-Life Campaign.

The groups are canvassing every weekend, campaigners say, and some local groups have been doing so for months.

“To us the ground campaign is the most important thing . . . that’s where we’re concentrating our members,” says Niamh Uí Bhriain, spokeswoman for the Life Institute, an anti-abortion group.

A social media strategy is being run by the group’s headquarters which seeks to identify voters who are open to hearing anti-abortion messages.

“It’s all about bringing the right message to the right people,” Uí Bhriain says. “It allows you to target your message. It’s not like a billboard.”

She adds: “But there’s lots of people not on social media. What’s really important is that we bring clarity; how radical this proposal is, and how much it will change Ireland. ”

There are a number of groups campaigning to retain the Eighth Amendment, but according to Sherlock, there is not a hierarchy or leadership.

“There’s a few different groups. We touch base with one another. But there isn’t any overarching co-ordination or strategy,” Sherlock says.

While they may feel shut out by the political establishment, anti-abortion campaigners praise the TDs who raised the issue of lives saved by the amendment, which gives equal right to the life of the unborn, in the Oireachtas.

These interventions were well reported but, nonetheless, complaints about “media bias” are a constant theme among the campaigners. Of course, pro-choice campaigners often complain about media coverage, too.

“Lots of people in the media have a view, that’s clear. But we think lots of the public are not familiar with our arguments,” says Sherlock.

“When we say to people, do you know that one in five pregnancies in the UK ends in abortion, people are stunned by that. Even a lot of journalists are not familiar with these facts,” she says.

There are personal stories on both sides

“I hope that people who have been shut out of the debate are admitted to it . . . You have to be open to hearing all sides of the debate.”

“It’s like the Lisbon or Nice referendums, all the political establishment, all the media, all the people with power and influence are on one side,” says Uí Bhriain.

“I can see people at the doors grappling with it. It’s complex. But they know it’s not just another part of a woman’s body. They’re not stupid. They’ll all have seen scans and whatever. But in the Dáil, there’s hardly any voice at all about that.”

Anti-abortion campaigners acknowledge that the personal stories of women who have gone abroad for abortions have been a new element in this episode of Ireland’s periodic arguments over abortion. But they say that they will also promote personal testimonies of a very different kind.

The anti-abortion movement is also preparing to publicise the stories of Irish people who have worked in facilities which provide abortion abroad, she says.

“You’re going to hear them,” she says. “I think people will find it quite shocking.”