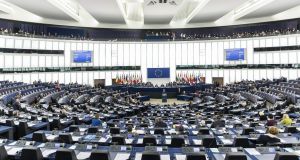 The State is set for a Brexit bonus of sorts after MEPs on Tuesday backed proposals to allocate two of the seats to be vacated by the UK in the European Parliament to Ireland.

Under the proposals, MEP numbers will be cut from 751 to 705 after Brexit, with 27 of the 73 vacated seats redistributed to current member states.

The decision on Tuesday by the parliament’s constitutional affairs committee will have to be ratified by the full parliament next month, and then, unanimously, by EU leaders.

The committee noted that although Brexit is to take Northern Ireland out of the EU, Northern Ireland citizens, under the Belfast Agreement and the likely Brexit divorce settlement, would retain a right to Irish and therefore EU citizenship.

The committee also made provision for up to 46 seats to be allocated either to potential new members, or, for the first time, to a pan-EU list to be voted on throughout the union.

Introducing such a transnational constituency would strengthen the sense of EU citizenship and the European character of elections to parliament, some MEPs argue.

A special EU summit late next month has been convened to allow the bloc’s leaders to debate post-Brexit institutional representation, ahead of next year’s European elections. It is thought likely that the leaders will endorse the MEPs’ approach.

Among the proposals they are also likely to endorse is the formalisation of the so-called “Spitzenkandidat” system, under which candidates for the presidency of the European Commission would be nominated by European Parliament groups.

In the last presidential election, the group with the most votes across the EU, the European People’s Party, saw its nominee, Jean-Claude Juncker, duly appointed.