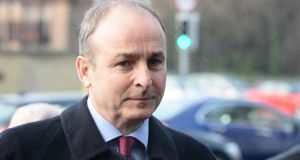 Fianna Fáil leader Micheál Martin’s decision to support a vote to legalise abortion on request in the early months of pregnancy has prompted a huge reaction in the party. Photograph: Cyril Byrne/The Irish Times

Fianna Fáil leader Micheál Martin says he changed his stance on abortion having evaluated the evidence from the Oireachtas Committee on the Eight Amendment.

Fianna Fáil TDs were stunned on Thursday evening by the unexpected declaration by Mr Martin that he would vote for the proposal to legalise abortion on request in the early months of pregnancy.

The announcement earned him plaudits from repeal campaigners but shocked some members of his party.

Mr Martin said on Friday he had been taken aback at the response of many women in his party who had thanked him for his position. However, he accepted others in Fianna Fáil did not agree with him.

While some Fianna Fáil TDs publicly praised Mr Martin, privately some were horrified.

One TD predicted Mr Martin would be “lynched, killed” by his parliamentary party while another said there would be “war” but that it would ease off after few days.

Mr Martin was previously a supporter of the constitutional ban on abortion and has often described himself as coming from a “pro-life” perspective.

Speaking on Friday about his change of position on the matter he said abortion was a deeply personal and ethical issue and was not a party political issue.

“All I can say is that I’ve looked at this sincerely and deeply and came to my conclusions. I can ask no more of members of my party.”

He said the Eighth Amendment had not stopped abortion in this State and said people had to face up to the realisation that the law had caused real damage.

Mr Martin said politicians should be open to change. “I don’t necessarily believe they (the public) will be directed by politicians.”

“The Eighth Amendment is really inflexible in how it dealt with women in situations like fatal foetal abnormality,” he told RTÉ’s Morning Ireland.

Mr Martin said he had been persuaded by the strength of the arguments at the Committee on the Eighth Amendment hearings.

“Fundamentally it is a personal issue and one of conscience,” he said.

New information such as the prevalent use of abortion pills had also led to his change of mind. As did the case of Savita Halappanavar “we can’t be blind to that, to what happened there.”

Mr Martin also said he trusted the obstetricians and women of this country.

“I speak as an individual here. I don’t believe this is a party political issue. The approach is one of genuine, informed conscience.”

“Micheál has always said this is a matter for individuals and he has an individual view. He is entitled to express that. He has shown exceptional leadership.”

Party housing spokesman Barry Cowen said nobody should bear a grudge against Mr Martin for expressing his view.

“He gave each party member a right to express their own opinion and this is his view.”

Galway West TD Éamon Ó Cuív, who does not support the repeal of the Eighth Amendment, said he would not comment on Mr Martin’s speech but said each individual within the party is entitled to their position.

Roscommon-Galway TD Eugene Murphy said he was “very impressed” by Mr Martin’s passionate speech but did not 100 per cent agree with him.

One Fianna Fáil TD privately said Mr Martin’s speech had made them reconsider their position.

Mr Martin’s speech came a day after the majority of the Fianna Fáil TDs expressed their opposition to the Oireachtas committee recommendations at a parliamentary party meeting.

A number of Fianna Fáil TDs on Friday expressed their views on the abortion debate. Limerick TD and enterprise spokesman Niall Collins said he is in favour of repealing the Eighth Amendment and allowing for abortion without restrictions up to 12 weeks of pregnancy, in line with the recommendations of the recent Oireachtas Committee report.

A spokeswoman for the Abortion Rights Campaign praised Mr Martin and other TDs who supported the abortion proposals in the Dáil over the course of the two-day debate.

1 Irish in Canary Islands: Life has changed dramatically
2 Boy’s treatment by school over alleged thefts was ‘unbelievable’, judge says
3 Pubs to stay closed until September at least as restrictions tightened significantly
4 ‘This was like a nuclear bomb’: More than 2,700 injured in Beirut explosion
5 Hume brought to Derry as candles in windows light his way
Real news has value SUBSCRIBE