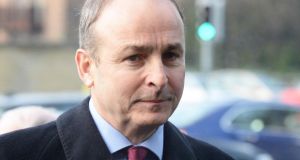 Micheál Martin: his speech would have been unthinkable from any Fianna Fáil leader in the past. Photograph: Cyril Byrne

Micheál Martin’s declaration that he will back repeal of the Eighth Amendment, and the legalisation of abortion on request up to 12 weeks, is a significant moment in the nascent referendum campaign and a startling development for many Fianna Fáilers.

A big majority of Fianna Fáil TDs who have made their views public (22 to seven, with 15 undeclared) are opposed to repeal of the Eighth Amendment, never mind the proposed legislation that would allow terminations up to 12 weeks of pregnancy, without restriction, by way of a GP service.

A vote of his party’s ardfheis before Christmas on the subject showed an overwhelming desire among those present at the session to maintain the constitutional protections for the unborn.

And opinion polls tend to show that Fianna Fáil supporters are the most anti-abortion of all parties.

Martin’s supporters say he is demonstrating leadership on a difficult issue; his opponents will say he is out of step with his own party.

It would be easy to ascribe Martin’s change of position to political calculation. The Fianna Fáil leader has been advised in some quarters – notably the British political scientist Tim Bale, who spoke at the Fianna Fáil ardfheis before Christmas – that opposing the liberalisation of Ireland’s law on abortion would damage Fianna Fáil among the young urban voters it needs. But Bale told The Irish Times he believed Martin would have thought this decision through – morally, medically and politically – before coming to an honest conclusion.

While Martin’s U-turn may be hailed by young urban voters – the reaction on social media certainly suggested as much – there is no guaranteed political payoff in that. Labour’s experience with the marriage equality referendum is instructive. And competition for those voters is fierce.

In fact, supporting abortion on request is likely to damage the Fianna Fáil leader among voters who are much more sympathetic to the party.

He has chosen to pass up that opportunity. It is likely to cause him difficulty among his own TDs and party members. It will attract fire from anti-abortion activists who had taken encouragement from the overwhelming rejection of repeal among Fianna Fáil TDs. There are external upsides and downsides, but the internal politics of this will be difficult for the Fianna Fáil leader.

It is the metier of political analysis to always seek political motivation for such decisions. And it’s true that politicians can’t by their nature shut out the political aspects and consequences of any choice or course of action. But if his carefully constructed speech is evidence of anything, Martin’s decision to change his mind on abortion is more likely to be the product of the same sort of private reflection and consideration that all TDs – on whatever side of the argument – are talking about in the lengthy abortion debate taking place in the Oireachtas.

It is a speech that would have been unthinkable from any Fianna Fáil leader in the past. And it has given the repeal campaign one of its biggest boosts to date. It helps repealers argue that the 12 weeks proposal is the middle ground. And that is where all campaigns are won.