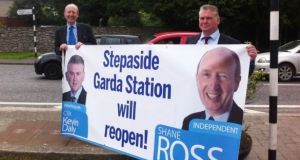 Minister for Transport Shane Ross said ‘the Government decision to close Garda stations was wrong, and the worst case of it in the country was on my doorstep’. Photograph: Mark Hilliard

Policing priorities and value for money were “not considered” in the decision to reopen six Garda stations, including Stepaside, a report published by the Public Accounts Committee (PAC) has said.

Reopening Stepaside Garda station in his Dublin Rathdown constituency was a major political issue for Minister for Transport Shane Ross.

The criteria for the review, which the Government provided to An Garda Síochána, did not “take account of policing priorities” in the Dublin metropolitan region, the committee report stated.

The report outlined that the PAC had concerns that value for money, resource implications, and policing priorities “were not considered” as part of the review into which Garda stations should be reopened.

The ultimate decision to green light the reopening of the six stations should take into account the “best use of Garda resources” and State funds, it said.

Assistant Commissioner Pat Leahy previously told the committee that based only on policing needs, areas such as Ballyfermot, Ronanstown and the north and south inner city would be considered a higher priority for extra gardaí than Stepaside.

The committee recommended that the Office of Public Works should first assess the Stepaside station building, to find the estimated cost of renovating the building and if a new building will be required in the future, before moving ahead with the decision.

Members of the PAC described the decision to list Stepaside as one of the six Garda stations to reopen as “parish pump” and “stroke politics.” These comments were not included in the report.

Speaking at the publication of the report Labour TD Alan Kelly said the decision to reopen Stepaside station was a “political” one. He said “any decision that isn’t based on policing need is something to be deeply worried about,” and that the Government should reflect on the move.

Social Democrats TD Catherine Murphy said the terms of reference given to gardaí by the Government were constrained to only areas that had former Garda stations, rather than where they were needed.

Sinn Féin TD David Cullinane said if “the Shane Ross of 2011 was sitting here today as a member of the public accounts committee, he would be the first to be railing against what he would be calling parish pump politics, stroke politics.”

Fianna Fáil TD Shane Cassells said while reports “don’t use words like ‘stroke’”, ordinary people would be able to make up their own minds “on whether this was Del Boy politics or not”.

The news that Stepaside Garda station would be reopened was championed as a major win by Mr Ross and his Dublin Rathdown constituency neighbour Minister for Culture Josepha Madigan.

Separately, the report also recommended that given the “weaknesses” in the Health Service Executive’s oversight of the suicide prevention charity Console, there was a “moral obligation” on the HSE to pay staff outstanding wages they were owed when the charity closed in 2016.