Sinn Féin insists direct rule ‘not on the table’ for North 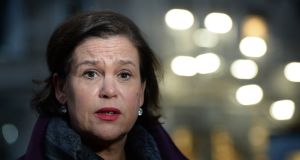 Sinn Féin leader Mary Lou McDonald has insisted there can be no return to direct rule for Northern Ireland.

Sinn Féin leader Mary Lou McDonald has insisted direct rule from Westminster is “not on the table” for Northern Ireland and has appealed to the DUP to return to talks aimed at restoring powersharing at Stormont.

The fifth phase of talks between Sinn Féin and the DUP aimed at re-establishing devolved government in the North ended on Wednesday when DUP leader Arlene Foster withdrew her party from the process.

Ms McDonald, speaking to reporters ahead of a meeting of Sinn Féin’s ardchomhairle in Dublin on Saturday, said her party would meet Taoiseach Leo Varadkar and Minister for Foreign Affairs Simon Coveney on Monday before travelling to Downing St for talks with British prime minister Theresa May on Wednesday.

“We will be telling all of them that there is no question of a return to direct rule, and that the two governments as a matter of urgency should convene the inter-governmental conference at a minimum because we now need to chart and plot our next steps,” she said.

“Direct rule is not on the table. The Government in Dublin has been crystal clear on that. They have reiterated that position. Direct rule would be entirely unacceptable to us and nationalist opinion.”

In relation to the “draft agreement” that had been agreed with the DUP, Ms McDonald said remaining discussions were focused on “presentational issues” rather than substantive road blocks.

However, she criticised commentary in the public domain which, she said, “alarmed” members of the unionist community.

“Some of the commentary on the airwaves was very irresponsible from people who ought to have known better and caused alarm and irritation at the very least in sections of the unionist population.

“That’s completely unwarranted and completely unnecessary. There was never any question of making Irish compulsory or of offending anybody else’s sense of identity, or place or belonging.

“I think in the draft agreement we found a way of delivering Acht na Gaeilge in a way that was coherent and in a way that dealt with the language...in a context that gave some comfort to others who might just be concerned.”

Ms McDonald also appealed to the DUP to reconsider its position on the draft agreement.

“We had a draft agreement and we have a draft agreement,” she said. “I would appeal to the DUP at this juncture to reconsider their position. Come back and talk to us, and get that over the line.”

Ms McDonald reiterated her view that “an accommodation” had been reached with the DUP, only for the party to then “crash” the process at the eleventh hour.

“We invested a huge amount of time in what was a very positive engagement with the DUP in an effort to resolve issues that are longstanding, and that carried some sensitivities for parties, and we reached an accommodation,” she said.

“We’re very very disappointed that that accommodation couldn’t be signed off on and closed by the DUP. But it does illustrate that these issues are resolvable. That remains our view.

“We believe in talking, and I have no doubt that at some stage we will be back around the table talking again. Of that, there is no doubt. At some stage, the talking has to resume. That’s an important thing.

“However, late last week, although we had an accommodation, the DUP crashed this process, and they did so in fairly definite terms. They’ve been very clear that, in their view, this is over. When we will be back around that table, I don’t know.”