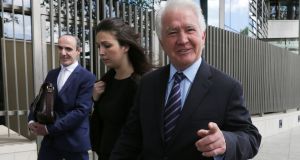 There were heated Dáil exchanges when Fianna Fáil TD Robert Troy claimed Minister for Transport Shane Ross had once recommended the then banker Seán FitzPatrick be made Central Bank governor.

During question time on Thursday, Mr Troy claimed Mr Ross had referred to the former chairman of Anglo Irish Bank as a “superstar’’, and recommended him for the job, in an article he had written when he was journalist.

“He continues to show his cheerleading abilities for the banks,’’ Mr Troy added.

“Now that he is in Government, he has done nothing to help the people who are suffering with tracker mortgages.’’

“Perhaps he will withdraw his remark in that regard,’’ the Minister added.

Fianna Fáil TD Eugene Murphy, who was acting chairman in the Ceann Comhairle’s absence, asked Mr Troy if he wanted to correct the record.

Mr Troy said he would check his sources.

Earlier, there were sharp exchanges between Mr Murphy and Mr Troy when the acting chairman insisted he was introducing material which was irrelevant to transport questions.

Mr Troy said Mr Ross had come into the House to lecture TDs about previous governments.

When Mr Murphy ruled him out of order, and asked him to retake his seat, Mr Troy continued to speak.

“No,’’ replied Mr Murphy, rising from his chair. “You sit down when I tell you. Resume your seat.’’

Mr Troy said he would do so out of respect for the acting chairman.