Designating more towns as cities would be ‘nonsense’, says Varadkar 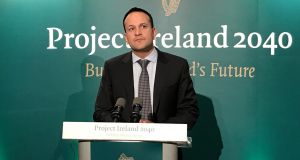 Mr Varadkar was speaking after the launch of the Government’s Project Ireland 2040 document which combined a 20-year plan to manage population growth of a million people and a €116 billion 10-year capital spending plan.

The Taoiseach was asked if towns like Sligo – which, along with Athlone in the midlands, was designated as a regional growth centre but was not granted city status – would be disappointed.

In response, Mr Varadkar said a previous National Spatial Strategy launched in 2002 by a Fianna Fáil-led government had identified too many centres for growth.

“This is not the National Spatial Strategy. It is not about designating new capitals,” Mr Varadkar said.“One of the reasons why the National Spatial Strategy failed was because there were 20 gateway cities and hub towns. That was a load of nonsense, and we decided that we wouldn’t go down that route. This isn’t about designating new cities or giving one town status over the other.”

The Taoiseach was also asked if people could believe the long-promised Metro project in Dublin – which has upgraded from a previous plan to run from the city centre to Swords to take in some south city suburbs – will actually be built after previous goals for completing the project were not met.

The new Metro Link project is due to be opened by 2027. The proposed route will go out for consultation in the coming months.

“It does takes time to build these projects,” Mr Varadkar said. “I remember when I signed the order for Luas cross-city. It took seven years to build but it is there. When I look back over the old NDPs (national development plans), this isn’t the first time that Ireland has produced an NDP but it is different for a particular reason.

“And notwithstanding the scepticism at the time, the vast majority of projects in those NDPs did happen. An NDP by a previous government was published and [there was] a suggestion that we might build a motorway to Limerick, Cork and Waterford and sure wasn’t this total pie in the sky.

“And yet, lo and behold , all those things were done. Sometimes they get in trouble, sometimes they run behind schedule, but they get done. And Metro North as it was then conceived was postponed because it had to be. It was postponed by me as transport minister because of the fact we were in a financial crisis. We are now out of that financial crisis.”

On the capacity of the construction sector to build the extra homes and infrastructural projects envisaged in the plan, Mr Varadkar said Ireland may benefit from more migrant workers in the years ahead.

He said at the height of the boom Ireland had been relying on migrants working on the construction industry to build 80,000 homes a year.

“One of the ways we were able to do that was through migration and having construction workers come in from other countries. We are going to need that again,” Mr Varadkar said.

“One of the few upsides of Brexit will be the fact that construction workers who are now welcome in the United Kingdom might not be able to live there and that is something that will make us more attractive.”

He said the capital plan also outlined €22 billion for projects that would help deal with climate change.

“This on its own won’t allow us to meet the 2030 targets, but it will bring us a good chunk of the way. So we estimate what’s announced in this plan will get us between a third and about 40 per cent of the way to meeting those targets.” .

The Taoiseach said “other measures would be needed too”, including more carbon emission taxes. “But we wouldn’t be proposing to tax farmers.”

1 Trump says Covid-19 will disappear after US reports record increase
2 Who are the new junior ministers? All their profiles are here
3 Open Ireland as soon as possible - Tourism chief warns of 'catastrophic' impact of pandemic
4 World, look away now – these are dark days for the United States
5 Bobby Storey: The IRA's planner and enforcer who stayed in the shadows
Real news has value SUBSCRIBE