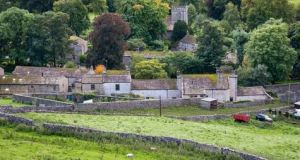 The plan makes a distinction between once-off rural homes lived in by farmers and other country dwellers and those desired by those who want to leave towns but still commute for work and school. Photograph: Getty Images

The construction of once-off houses in Ireland’s countryside by people wanting to leave towns and cities will be discouraged under the Government’s National Development Plan.

The new blueprint for long-term planning in Ireland over the next decade has discouraged future housing that is “urban-influenced” and contributes to ribbon development.

However, it makes a distinction between once-off rural homes lived in by farmers and other country dwellers and those desired by those who want to leave towns but still commute for work and school.

The rules for the latter are much stricter. With 37 per cent of people living in the countryside or in villages with populations of 1,500 or less, the plan is to protect areas under strong urban-influenced ribbon development.

Its priority in housing is to target such housing within the existing boundaries of villages – over 30 per cent of new housing should be located here, it states.

This element of the plan was subject to intensive lobbying from rural TDs and Senators over fears that it would clamp down on once-off rural housing.

While the language of the planning framework has not changed from the draft, parliamentarians were earlier reassured by Minister for Housing Eoghan Murphy that the framework would have no impact on existing planning guidelines. “There is nothing to fear in this,” he told colleagues earlier this year.

The plan says that “urban-influenced” housing would only be permissible “on the core consideration of a demonstrable economic or social need to live in a rural area”. This would include the commuter catchment of cities and large towns and centres of employment.

For other rural housing, where the house is located on a working farm for example, the provision will be based on the existing guidelines.

“A more flexible approach, primarily based on siting and design, will be applied to rural housing in areas that are not subject to urban development pressure. This will assist in sustaining more fragile rural communities and in overall terms will need to be related to the viability of smaller towns and rural settlements,” it states.

To determine the quantity of single rural housing that will be required until 2040, local authorities will be asked to complete housing demand assessments.

The plan encourages a move away from once-off housing in the countryside to more housing in villages and towns.

“An increase in the proportion of more compact forms of growth in the development of settlements of all sizes, from the largest city to the smallest village, has the potential to make a transformational difference.It can bring new life and footfall, contribute to the viability of services, shops and public transport, increase housing supply and enable more people to be closer to employment and recreational opportunities, as well as to walk or cycle more and use the car less.”