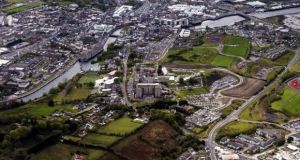 One of the most striking features of the economic geography of the northwest is the lack of a large urban centre. Both Sligo and Letterkenny are roughly the same size with a population of just under 20,000, which means that they rank 23rd and 22nd respectively.

That along with the geographic barrier of relative remoteness, a more rugged topography and the disadvantage of the Border have reduced the economic growth of the region.

The proximity to Derry with its population of more than 80,000 has helped parts of Donegal, but Brexit threatens this cross-border spillover.

Sligo is over 100km from Galway and serves the wider region including Leitrim, north Mayo, north Roscommon, west Cavan and south Donegal. As such it serves a vital function for a large region, and it is not surprising that over 55 per cent of all jobs in the county are located in Sligo town. Indeed the number of jobs there exceeds that of much larger towns such as Dundalk.

This is due to the fact that any road improvement between Sligo and Dublin will also benefit all places in between. Longford will still be closer to Dublin than Sligo, but both will have a shorter travel time to the capital. If travel time to Dublin is the only factor determining investment, then Longford will always do better than Sligo, no matter how much we improve the road.

The same is true in an international context - few multinationals invest in Ireland because of our central location, rather they come here because of other factors.

This highlights the need to focus on areas other than accessibility. Ireland is fortunate to have a comparatively young population, and by international standards, a good education system. This means that Ireland does well in industries that require a high level of education which generates higher incomes. This is an area where Sligo does well.

The county ranks sixth in terms of percentage of the population with a third level qualification, ahead of larger places such as Limerick city and county (10th) and just behind Cork city and county (fifth). This is in part due to the presence of Sligo IT, but also other employers such as the Abbott, and Sligo General Hospital.

An important factor in this is that quality of life is a key attraction for highly skilled individuals that tend to be more mobile both nationally and internationally. This is a key advantage and Sligo can make more of this.

This is not just about a seaside location and other attractive countryside, but also about the quality of the urban realm and other facilities available. Expanding the range of facilities is only feasible if Sligo town can grow faster than the 0.7 per cent it has managed annually between 1971 and 2016, which makes it one of the slowest growing large urban centres in Ireland. Scale is a key factor - the number of jobs in Sligo town and county in 2016 was still below that recorded in 2006, but in larger places this has recovered to pre-crisis levels.