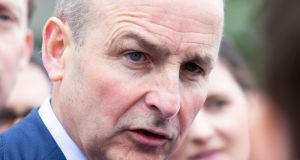 Fianna Fáil leader Micheál Martin: Ministers want to know if he intends to agree to a May 2020 general election to prevent Leo Varadkar calling for a November poll. Photograph: Tom Honan for The Irish Times.

Fine Gael Ministers are warning that Fianna Fáil leader Micheál Martin will have to commit to holding a general election in May in order to stop Taoiseach Leo Varadkar going to the country next month if the revised Brexit deal passes the UK parliament.

Mr Varadkar has repeatedly said his preferred date for holding the next general election is May 2020, but he has criticised Fianna Fáil for linking the duration of the confidence and supply deal to Brexit.

Mr Martin last year extended the confidence and supply arrangement, which sees his party underpin the Fine Gael-led minority government, to cover the budget introduced earlier this month and to allow for Brexit to take place.

Speaking RTÉ’s Sean O’Rourke on Friday, Mr Martin said his position has “always” been that the election should be held next spring. He also said he believes Mr Varadkar will wait until May.

Fianna Fáil Offaly TD Barry Cowen also said of the Taoiseach: “He says May, we say spring – sure it’ll be somewhere around or between the two.”

However, the view that Mr Varadkar should call an election if there is an orderly Brexit at the end of the month has taken hold in Fine Gael, and pressure in the party will increase if the revised Brexit deal is passed through the House of Commons.

Even those close to the Taoiseach admit they do not know Mr Varadkar’s precise thinking. A common view in the party is that Mr Martin wants Fine Gael to be in office for another winter of health and housing controversies. Party TDs have said Mr Martin could have committed to an election date but failed to do so.

One Minister close to Mr Varadkar said there is “no other way” to prevent a November election, in the event of an orderly Brexit, apart from Mr Martin agreeing an election date.

“I was shocked he didn’t do it this week,” the Minister said. “He was too proud. He’s had good judgement the past 12 months, but not to grab May this week was a surprising lapse.”

Of Mr Varadkar’s stated preference, another Minister said: “That may be coloured if Micheál Martin doesn’t give some sort of commitment on May. Micheál Martin is the person who needs to indicate that he is not going to put party policies ahead of doing the right thing for the country.”

Another said: “We have to flush Micheál out on this now.”

Minister for Health Simon Harris yesterday said nothing but “silence” was coming from “the leader of Fianna Fáil”.

He said Mr Martin needed to provide clarity in the coming days and weeks to avoid “nonsensical” speculation continuing. Minister for Rural Affairs Michael Ring said he said he hoped Mr Martin will agree to hold the election “just before the football season” begins next summer.

Fianna Fáil figures claim Fine Gael is not ready for a November election and say that, on that basis, Mr Varadkar will not call one.

Fine Gael sources reject this but say the party still has to finalise tickets in Waterford, Cork South West, Donegal and Kerry, as well as making potential changes in Dún Laoghaire, where TDs Mary Mitchell O’Connor, Maria Bailey and Cllr Barry Ward are the candidates.