Visitors to Stormont witness a one-hour imitation of democracy

No abortion debate after proceedings fall at first hurdle: election of a speaker 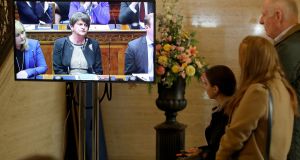 It was a curious day at Stormont. After more than 1,000 days there was some political action again at Parliament Buildings and in the Northern Ireland Assembly chamber.

The Assembly research and information service had helpfully provided MLAs with a document on the “legislative position in Northern Ireland”, running to around 180 pages.

There was even a paper setting out the “indicative timings for order of business”, which had the Assembly sitting at noon and adjourning precisely at 5.47pm.

During the day there were school groups and other visitors being shown around Parliament Buildings. Some of them could have been forgiven for thinking here was democracy at work.

They were wrong, of course. The Assembly began sitting shortly after 1pm and rose again shortly before 2pm, because it could not get past the first item, the election of a speaker.

This in turn meant that the move to try to override the Westminster legislation on abortion introduced in July had failed. It all meant that from midnight on Monday, abortion was decriminalised. That legislation also allowed for same-sex marriage, and pensions for people seriously physically and mentally scarred by the Troubles.

But the main passions, emotions and sensitivities were focused on abortion. There were demonstrations around the Edward Carson statue outside Parliament Buildings from people representing the two sides of the argument but, a little surprisingly, they were quite small, about 100 people from each side.

The DUP sought and received advice from the North’s attorney general, John Larkin QC, who said that standing orders could be suspended to allow the Private Members’ Bill to be passed. That Bill sought to ensure that the law on abortion was a matter for the Assembly and not Westminster to decide.

However, acting speaker Robin Newton, himself a DUP member, cited his own legal advice and, despite pressure from DUP MLAs such as Arlene Foster, Paul Givan and Edwin Poots, refused to allow debate on the motion to proceed.

Instead he insisted the first item of business was the election of a speaker. Under the Belfast Agreement such an election requires a cross-community vote, but the only politicians from the nationalist side in the chamber at that time were from the SDLP, and before there could be any vote on a speaker they all walked out. This in turn meant the end of the sitting and the beginning of the recriminations.

In the grand hall of Parliament Buildings, Arlene Foster said it was “wrong” that abortion could be permitted up to 28 weeks, as babies could live outside the womb from as low as 22 weeks. And while some people would celebrate the change in the law, this was a “very sad day”, she said.

“I would say to those people, think of those of us who are sad today and think that this is an affront to human dignity and human life.”

There is no absolute clarity as to whether Foster is correct in saying the law now permits abortion up to 28 weeks. Abortion has been decriminalised, and new legislation to determine how that law will operate must be in place by the end of March. Quite what happens in the meantime appears foggy, and it possibly could be a matter for the courts to try to provide some legal precision.

Sinn Féin’s Mary Lou McDonald and Michelle O’Neill were quite relaxed about the change in abortion legislation – McDonald said her party’s wish was that it would “mirror” the law in the South, where abortion is permitted up to 12 weeks – but it must be troublesome for the SDLP, which describes itself as a pro-life party although it allows individual members freedom of conscience on the matter.

“For some who proclaim themselves as pro-life, and I refer directly to the SDLP, had an opportunity today to allow a speaker to be elected, and then to allow the suspension of standing orders which would have allowed the Bill . . . to be brought in to defeat the change that is coming.”

And he didn’t spare Arlene Foster, either. He also said the DUP could have used its influence with the Conservative government to prevent the Westminster legislation on abortion going through.

So that is what we got after a thousand days: dispute and acrimony but no solutions, and no sign of Stormont being properly returned as a functioning Assembly. No wonder Colum Eastwood, when speaking of his frustration at the failure to reinstate powersharing, should describe the lacuna as a “thousand years”.