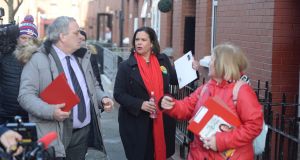 RTÉ has reiterated that it will not be including Sinn Féin president Mary Lou McDonald in the Prime Time leaders’ debate scheduled for the last week of the election campaign.

Sinn Féin is consulting its lawyers and will write to RTÉ over its decision to only have Taoiseeach Leo Varadkar and Fianna Fáil leader Micheál Martin as participants in the Prime Time leaders’ debate which is scheduled for February 4th.

A RTÉ spokeswoman said the broadcaster had nothing to add to the statement that it issued on Friday ruling out including Ms McDonald in the second leaders’ debate.

It stated that the first leaders’ debate as part of Claire Byrne Live will see leaders from a number of political parties participate on Monday, January 27th.

The second one four days before the election will only involve the leaders of the two main parties.

Sinn Féin’s director of elections Pearse Doherty is to write to RTÉ management immediately asking the broadcaster to reconsider its decision.

Speaking during a canvass in Dublin’s Liberties on Sunday, Ms McDonald said both main parties together barely muster half the support of the electorate and therefore it is wrong to exclude her from the debate.

“Almost half of the electorate won’t vote for Fianna Fáil or Fine Gael in any circumstances. It’s wrong for the national broadcaster to exclude so many voices,” she said.

“It’s not about me and it’s not even about Sinn Féin. You cannot decide that you attach greater weight to the vote of one section of the people and not the other.

“I was surprised at the extent to which people raised this issue with me. It’s unfair to exclude other voices. We are going to challenge it hard.”

Ms McDonald said she was pleased at Sinn Féin’s showing in the latest Sunday Times/Behaviour and Attitudes poll which shows the party at 19 per cent, just one per cent behind Fine Gael whose vote has collapsed from 27 per cent to 20 per cent. Fianna Fail was at 32 per cent in the same poll.

The electoral snapshot was taken between January 7th and 14th before the general election was called.

She said the poll showed clearly that the election was not a “two horse race. It shows what we already know.”

She attributed Fine Gael’s waning support to the party’s performance on health and housing, but also suggested that the row over the now postponed Royal Irish Constabulary/Dublin Metropolitan Police commemoration might have been a factor.

She accused the Government of making an “insulting mistake” in terms of the proposed commemoration and that it was out of touch with public opinion in relation to the issue.

“Whatever the intelligentsia of this country might think, and they are entitled to their view, their views do not tally with the vast number of people across this land,” she suggested.

“We want to build a positive future, but we will have not have the bravery of those who fought the Black and Tans insulted or dismissed in any way.

“The reaction of people across the people across the board was strong, swift and determined. Despite those who tried to tell the people that we were somehow immature not to remember our history, our past and our identity, I think Irish public opinion has given them their answer.

“There would be no government in Dublin, no RTÉ, no officer of taoiseach or tánaiste except for those who fought the Black and Tans and communities and families know that.

“They will not have our past or our patriotic dead disrespected by anybody including a sitting government.”

However, Ms McDonald stated that the row would not be most significant factor in the election.

“A certain section of the public are ready for change now and for us, as advocates for a fair society, I believe that we have the policies that can crack the housing crisis and health”.