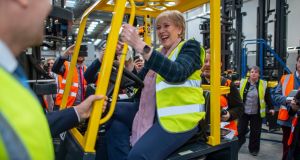 It is no coincidence that this is the constituency in which Fine Gael launched its general election campaign.

The party is hoping to secure two seats here and has put a considerable amount of time and attention into canvassing the constituency.

Given that the constituency has gone from four to five seats, the competition is intense between Fine Gael and Fianna Fáil, which both want to win an extra seat.

While the Minister for Business, Enterprise and Innovation Heather Humphreys looks safe, it remains to be seen if enough has been done for Cllr TP O’Reilly, who was added to the ticket after outgoing senator Joe O’Reilly stood aside just before Christmas, to take a seat. O’Reilly is said to be very popular in the constituency and one Fine Gael observer said the party was hoping transfers would take him over the line.

Fianna Fáil is running Brendan Smith and Niamh Smyth, both of whom are expected to take a seat. Niamh Smyth in particular is said to have put great effort into her constituency work, making it a priority throughout her time as a TD in the Dáil.

As the general election campaign kicked off, it was announced that Sinn Féin’s Matt Carthy – the only one of three Sinn Féin MEPs to retain a seat in May’s European elections – was putting his name forward here too.

He is also expected to take a seat.

Having said that, the Green Party is running Tate Donnelly, an impressive 21-year-old who is viewed as one of the party’s rising stars. At this stage, it looks like he may be among the youngest candidates in the country. Securing a seat could be a tough ask for him given the more rural nature of this constituency, but given the recent Green wave and the fact the party is considered transfer-friendly, he is surely one to keep an eye on.

The big issues in this constituency are, naturally enough, Brexit but also the need for increased investment in infrastructure such as roads.