Referendum to ease restrictions on divorce to be held next year

At present, the constitution only permits divorce where spouses have lived apart for four of the previous five years 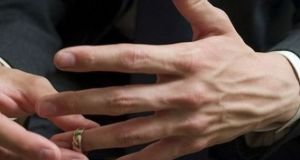 A referendum to ease the constitutional restrictions on divorce is to be held next year on the same day as the local and European elections in late May, the Government has decided.

At present, the Constitution only permits divorce where certain conditions are met, including that the spouses have lived apart for four of the previous five years.

Now the Government proposes to either reduce the four year requirement or take it out of the constitution altogether, depending on consultations with the opposition parties which are to begin immediately.

The move comes after the Government accepted a private members bill in 2016 by the Fine Gael TD Josepha Madigan, then a backbencher but now Cabinet minister, which proposed a liberalisation of the law.

Ms Madigan’s bill was supported by all parties and Leinster House sources say that it is unlikely to be a contentious political issue. However, a Government spokesman said on Tuesday that the question of whether the separation period should be reduced from four years to two, or taken out of the Constitution entirely, would be decided over the coming weeks. It is intended to begin discussions with the other parties and independents immediately.

Earlier this year, following the passage of the abortion referendum, Ms Madigan suggested that divorce could be removed from the Constitution entirely, leaving the responsibility to the Oireachtas to legislate for any conditions.

The stringent restrictions on divorce in the Constitution were inserted in place of the blanket ban which was removed in the 1995 referendum. At the time, after the experience of the 1986 divorce referendum defeat, it was believed that a constitutionally restrictive form of divorce would be endorsed by voters. In the event, the 1995 referendum was passed by a wafer-thin majority.

Following consultations with the opposition and further work by officials in the Department of Justice, the Government will bring forward a bill in January to provide for a referendum on a constitutional amendment to take place on May 24th, on the same day as the local and European elections.

The decision to hold the referendum next year was made by the Government at Tuesday’s Cabinet meeting.

The Government also intends to propose another referendum on the same day, which would allow Irish citizens resident abroad to vote in presidential elections on the same day, a spokesman confirmed.