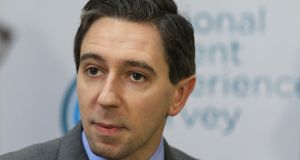 Minister for Health Simon Harris told a Dáil debate on abortion legislation: ‘I hear a lot about human rights and I have some breaking news. Women’s rights are human rights.’ File photograph: Nick Bradshaw

Minister for Health Simon Harris has rejected calls to ban abortion on the ground of disability, saying it would make the Bill governing abortion law in the State inoperable and would stigmatise women.

An amendment was proposed to the Regulation of Termination of Pregnancy Bill in the Dáil on Thursday by anti-abortion TDs including Mattie McGrath and Peadar Tóibín which would prohibit abortions being sought on the grounds of race, sex or disability.

Fianna Fáil TD Éamon Ó Cuív expressed concerns that advances in technology could mean that people could test for disabilities sooner in their pregnancies.

However, Mr Harris said he could not accept the amendment as it would create substantial difficulties for doctors in providing certification to provide abortion services. Mr Harris said the Bill only provided for abortion where there was a risk to the life or serious harm to the health of a pregnant woman, where there was a fatal foetal abnormality, or where the pregnancy had not gone beyond 12 weeks.

“Terminating a pregnancy otherwise than in accordance with the provisions of the Bill is an offence which may be prosecuted. The legislation does not provide for termination of pregnancy to be carried out on the grounds of sex, race or disability,” Mr Harris said.

He said the proposals were “entirely unworkable” and would, in his view, “stigmatise women in crisis pregnancies by allowing its proposers to suggest that these are their motives”.

He said the only possible intention would be to render termination services “practically entirely inoperable” as it would require a doctor to be able to “determine a woman’s thoughts which she may choose to keep private, and in fact be satisfied as to the absence of those described”.

Mr Harris said: “This would likely have the effect of creating substantial and unnecessary difficulty for doctors in providing certification. It would make the entire premise of the early pregnancy section of the Bill inoperable.

“I hear a lot about human rights and I have some breaking news. Women’s rights are human rights and we have been violating them in this country for about 35 years and the Irish people have said ‘no more’.”

“This is a case of ‘let them deny it’. It is a case of trying to make the Minister vote against putting a clause in the Bill to protect people with a disability, or trying to make Fianna Fáil, Sinn Féin, Labour, Fine Gael or whoever do so, but it will not work.”

Independent TD Michael Collins said the majority of the media had failed to challenge Mr Harris on his “spin.”

“He would like all of us to believe that if it is not specifically legal to abort on the ground of disability, it will somehow not happen in Ireland. That view is very naïve.”

Former Sinn Féin TD Peadar Tóibín said that “a ten year old child studying a Venn diagram in school knows that if abortion is made available for every reason it is available for disability also within that Venn diagram.”

People Before Profit TD Bríd Smith said the reason it was decided to allow for access to abortion up to 12 weeks without restriction was because of the existence and widespread use of the abortion pill.

The amendment was defeated by 71 votes to 21.

Another amendment which sought to stipulate that a medical practitioner must take all steps to preserve the life of a foetus if it was born alive was defeated by 59 votes to 39.

Independent TD Michael Harty said the amendment was not practical because it was already the case that if a foetus was born alive, “medical ethics would kick in to give every assistance to that baby”.

The legislation will return to the Dáil next week for the consideration of further amendments.