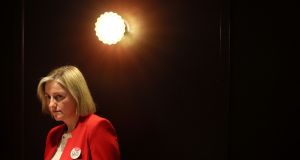 Spokeswoman Cora Sherlock at the launch of the ‘Love Both’ campaign in Dublin. Photograph: Brian Lawless/PA Wire

The Government’s proposed abortion laws would lead to “one of the most extreme abortion regimes in the world, even more ghastly than the UK abortion laws,” the Pro-Life Campaign has said.

Speaking at the unveiling of the Pro-Life Campaign’s “Love Both” campaign against the referendum spokeswoman Caroline Simons said “voters who support abortion in limited circumstances need to know that what they hope for with Repeal and what they get are two entirely different things”.

“A vote for repeal is a vote for abortion on demand,” she said.

“The Government could have chosen to amend the amendment to allow for so-called hard cases,” said Ms Simons. Instead, she said, the Government had “opted for a proposal that takes away all meaningful protections from unborn babies”.

“The only way to stop this from happening is to vote No on the 25th of May,” she said.

Introducing the speakers, former UCD Students’ Union president Katie Ascough said it is “clear that momentum is growing” against the referendum.

Love Both spokeswoman Cora Sherlock said if the referendum is passed, “the Government will initiative a nationwide GP-led abortion service, providing for unrestricted abortion on request in the first three months of pregnancy. That means that doctors, who are trained to protect life will suddenly be expected to facilitate the taking of life.”

“As a group, GPs will be expected to routinely harm their pre-born patients in the false name of choice. And not just harm them, but actually kill them,” Ms Sherlock said.

She said that the Government proposal was “one of the deadliest abortion laws ever proposed”.

Aine Kerins, who is pregnant, said her ultra-sound scans had shown her clearly that her baby was a human being.

“An unborn baby is one of us and worthy of our protection,” she said.

She said the recommendations of the Oireachtas committee were a “very serious indictment of our political system that this was allowed to happen”.

“There is no such thing as restrictive abortion,” she said.

Sinead Slattery, who is also pregnant, said there was “one purpose and one purpose only for this referendum - and that is to introduce abortion on demand”.

A large number of young people in Love Both t-shirts attended the event, as did a number of anti-abortion TDs, including Eamon O Cuiv, Mattie McGrath, Michael Healy-Rae, Declan Breathnach, Peter Fitzpatrick and Kevin O’Keeffe.