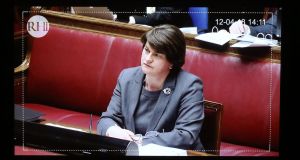 Democratic Unionist leader Arlene Foster has defended her role in Stormont’s botched green energy scheme during her appearance before a public inquiry.

Ms Foster said she would have taken different decisions as Northern Ireland’s then economy minister if she had been fully informed on the flaws within the Renewable Heat Incentive (RHI) initiative.

She told the inquiry that, based on the information available to her at the time, she had not done anything wrong.

“If I had have been made aware of various issues I would have acted differently,” she said.

A furore over Ms Foster’s handling of the ill-fated RHI prompted Sinn Féin to pull out of powersharing at the Stormont Executive in January 2017, a move that forced the DUP leader from her role as first minister.

Giving evidence to the inquiry for the first time, Ms Foster said the affair was a “matter of deep regret for me politically and personally”.

But she claimed the issue was not the real reason Sinn Féin torpedoed powersharing, merely a “useful excuse”.

The RHI was supposed to incentivise the purchase of eco-friendly wood chip boilers by paying a state subsidy to those signing up to the scheme.

However, a series of fatal flaws left Stormont exposed to a huge overspend, with the scheme paying out more to applicants than it actually cost them to buy the fuel.

This created an impetus to “burn to earn” – a reason the controversy has been dubbed the “cash for ash” scandal.

Ms Foster was economy minister when the scheme was rolled out in Northern Ireland in 2012.

At the start of a two-day appearance before the inquiry panel, which is chaired by retired judge Sir Patrick Coghlin, Mrs Foster said: “I very much welcome the opportunity to be here at a fact-finding inquiry because up until now we have just had a lot of speculation – a lot of it misinformation, some of it very malevolent – but it is good to be here to look at the facts of what happened.

“Clearly, the way in which the RHI scheme has brought us to this place is a matter of deep regret for me politically and personally, because obviously we don’t have government here in Northern Ireland as a result of what happened in December and January 2016 and 2017.

“In terms of what happened in the scheme it is for the panel of course to make a determination as to what went wrong at that time, but certainly having reviewed all of the submissions that have been sent to me, it is difficult to see what I could have done differently at that time.

“I wasn’t brought up to date with things that were happening in the background and I regret that. If that had have been brought to my attention things may have been a lot different.”

Opening the session in the Senate Chamber of Parliament Buildings in Belfast, counsel to the inquiry David Scoffield QC stressed that Ms Foster would be treated like any other witness.

He highlighted that the format of the investigation was inquisitorial.

“Mrs Foster, like every witness who appears before the inquiry, will be asked probing questions but she won’t be cross-examined in an adversarial manner,” he said.

Mr Scoffield said she would be treated with “rigour, courtesy and fairness”.

Ms Foster told the inquiry the energy brief was among the more complex within her department, and she did not understand all the nuances.

Renewable heat was a European directive that had to be dealt with, she said. “I did rely on my officials in energy to help me to understand all the complexities.

“Did I rely on them more than I relied on officials in tourism or economic development? I probably did.”

However, she said there was no less scrutiny of submissions from energy division officials. “There was no skim reading involved.”

The DUP leader was quizzed about the role of her special adviser Dr Andrew Crawford, who had earlier given evidence. He was a political appointee who assisted with the nuts and bolts of policy development, the inquiry heard.

Ms Foster said: “He was someone who was very good with detail. He obviously has a doctorate in agriculture. He was very much aware of the issues.”

She said Dr Crawford was first appointed when she was at the Department of Agriculture. “He would have had an expertise in reading documents” before they were given to the minister. Ms Foster added: “I don’t think either of us were experts in the energy division.”

The DUP leader also said she took “comfort” from the fact that there were a lot of “checks and balances”.

She said: “If we look back at all the processes this went through before it actually went live in 2012, there were a lot of checks and balances there.

“Apart from the consultants’ report and the expert advice that we had brought in at considerable cost, there were the energy division themselves.

“There was the case work committee, of course, which would have gone into the detail of the scheme and the comparators and DFP (Department of Finance and Personnel) would have been involved.

“Of course, state aid looked at the tariffs as well – the European Union which has many people to look at these things.

“There were a lot of checks and balances there to look at these issues.”

Inquiry panel member Dr Keith MacLean said: “Those three examples that you have given may have scrutinised what came to them but they weren’t looking at it in the earlier stages where it may have been possible to choose between schemes put on the table.” – Press Association

Fine Gael to stress economic warnings as campaign enters crucial week 01:00
Seamus Mallon remembered: A man with ‘sharpest political antennae’ 01:00
‘It’s something you don’t want to hear. You always think it happens in other places’ 01:00
Funeral of Seamus Mallon to take place in Co Armagh on Monday 01:00
No obvious signs of injury on remains of McGinley children 01:00
SUBSCRIBER ONLY