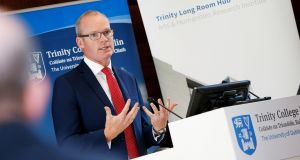 Simon Coveney: expected to stress Ireland’s desire for the closest possible relationship between the EU and the UK. Photograph: Julien Behal Photography

Progress on the shape of the future relationship between the EU and the UK in the coming weeks is the key to securing agreement on a legally binding backstop, the Tánaiste Simon Coveney has said.

Mr Coveney said that if the British government believed it was never going to have to use the backstop provision – because it would agree a close future trading relationship – then it was more likely to agree the backstop.

The Minister for Foreign Affairs was speaking before departing for Berlin last night, where he will address an audience of German diplomats and business people today.

The British government agreed on the principle of a backstop – guaranteeing no hard border in Ireland even if there is no agreement on a future relationship – last December but has since rejected a draft text from the EU that would have kept Northern Ireland inside the EU’s single market and customs union.

The EU has also rejected a British approach that would have extended the single market and customs union advantages to the UK as a whole.

Mr Coveney was keen to draw a distinction between the two strands of talks taking place in Brussels between the UK and the EU: the negotiations on the text of the Withdrawal Agreement, which must include a legally binding backstop, and the negotiations on the future relationship between Britain and the bloc, which are likely to continue for another two years, assuming the withdrawal treaty (which also includes a transition period) is agreed in the coming months.

“The British government has made it clear they need as much clarity as possible on what the future relationship will look like before they can sign off on a withdrawal treaty,” Mr Coveney said at Trinity College yesterday, where he was attending an event at the Long Room hub.

“I think that comes into real focus when you talk about the Irish backstop, because if we have a clear signal on what the future relationship is likely to look like, which means that the backstop is less likely to be used in the future, then of course it’s easier to agree it,” he added.

“So the two are linked, but they are in some ways separate negotiations in terms of legal text.”

Mr Coveney is attending the meeting at the invitation of the German foreign minister Heiko Maas. He will also hold a bilateral meeting with Mr Maas, which is likely to focus on Brexit issues.

This is profoundly in the economic, political and security interests of both sides

The Tánaiste is also scheduled to brief German journalists on Ireland’s Brexit position and give an interview to Reuters Germany.

Mr Coveney is expected to stress a growing theme in the Government’s communications on Brexit: Ireland’s desire for the closest possible relationship between the EU and the UK.

“This is profoundly in the economic, political and security interests of both sides,” he will say, although he will also stress that the new relationship “must respect the EU’s core principles and achievements, including the single market and customs union.

“If those essential elements can be safeguarded, then I think there is indeed scope for a unique future partnership,” Mr Coveney will say.

Mr Coveney will say that if the British government can “develop its position further”, then the EU should respond with concessions on its own.

“I am sure our union can be imaginative in return,” he is expected to say.