Northern Ireland archives: ‘The Anglophobes with chips on their shoulders have been discomfited’ – British ambassador 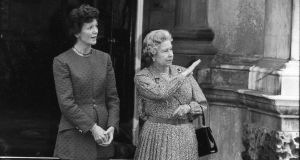 A historic courtesy call by president Mary Robinson on Queen Elizabeth II features in this year’s declassified Stormont files, released by the Public Record Office in Belfast under the 20/30-year-rule.

In a telegram to the foreign and commonwealth office and the Northern Ireland Office, dated June 1st, 1993, the British ambassador to Ireland, David Blatherwick described a meeting with president Robinson on her return to Dublin: “When I met the president on her return from London today she said she was delighted with the way her visit had gone when she called on the queen. She was especially pleased with the press coverage.”

Blatherwick told Douglas Hurd, the British foreign secretary: “The extensive television coverage had brought out . . . the significance of the meeting between the two heads of state. A major taboo has been overcome. The Anglophobes with chips on their shoulders and those who claim that the British still do not accept the Republic as an equal sovereign state have been discomfited.’

The diplomat felt that the meeting had made “all kinds of co-operation between the UK and Irish authorities that much less politically charged” and he hoped this would extend to Northern Ireland and security co-operation.