US voters must unite under ‘moderate’ to oust Trump - key Republican

After declining to answer a reporter's questions about the late US Senator John McCain throughout the day, US President Donald Trump finally spoke about McCain's passing during a meeting with evangelical leaders at the White House on Monday evening. 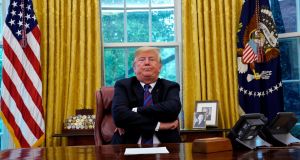 Mr Weaver, a moderate Republican, said a “centrist” Democrat will be preferable to Donald Trump. “I want someone to hold office who respects the institution.” Photograph: Kevin Lamarque/Reuters

An influential Republican Party strategist who has worked on a number of US presidential campaigns believes the party has reached its “nadir” under Donald Trump and that voters must unite behind a moderate candidate from either major party to unseat him.

Political consultant John Weaver, who is currently working as an adviser to Ohio Governor John Kasich, and has previously worked on presidential nomination campaigns with John McCain, John Huntsman and Kasich, will be in Ireland next month as one of the guest speakers at this year’s Kennedy Summer School.

Mr Weaver’s wife is Angela Hession originally from Claremorris in Co Mayo, and the couple make regular visits to Ireland.

The Texas-based Republican will be interviewed by academic Larry Donnelly at the summer school in New Ross on September 8th, on the theme of “presidential elections and political persuasion”.

Among the subjects likely to come up for discussion is that of the undocumented Irish immigrants in the US.

However, Mr Weaver does not believe there is much chance of their situation improving under the current regime.

The Republican Party is at it’s nadir now, because of the tone and the politics of Trump

“No. We came close twice [to a deal] but we couldn’t get it through the House. Right now, with this administration it’s not possible. I think in the next administration there will be a chance to get a wide-ranging deal, but not at the moment.”

He is also pessimistic about the reputation of the US abroad and internal relations between political sides improving under Mr Trump.

“The Republican Party is at it’s nadir now, because of the tone and the politics of Trump... The election of Trump unleashed a Pandora’s Box of bad policies. My concern is how can we get the hate and racism and misogyny and disrespect back into the box.”

I do think, ultimately, he will be defeated in 2020, assuming the Democrats don’t go so far left that a coalition can’t be made

In 2016, during the early days of Mr Trump’s campaign, Mr Weaver predicted the former reality TV star would “unleash thousands of mini-Trumps around the country” because of his outspoken views on issues such as immigration and trade. “We will have to go out and get rid of them, one by one. What I didn’t forecast, and what I’m shocked by, is the complete surrender of the Republican leadership,” he said.

He noted that, contrary to much popular opinion, Mr Trump “doesn’t really have a strong base, it’s about 25 per cent of the country”.

The president now has a disapproval rate of 58 per cent or more, meaning there is an opportunity there for a strong candidate to take him on in 2020, should he run again.

“I do think, ultimately, he will be defeated in 2020, assuming the Democrats don’t go so far left that a coalition can’t be made.”

Mr Weaver, a moderate Republican, said a “centrist” Democrat will be preferable to Mr Trump. “I want someone to hold office who respects the institution.”

He said Governor Kasich is “considering” making a run in 2020, following unsuccessful attempts in 2000 and 2016, and could campaign as an independent or a Republican.

However, if the Democrats regain control of the House of Representatives in this autumn’s mid-term elections, the strongest challenger to Mr Trump is likely to come from their ranks.

“They are going to have 20 people running, ranging from perhaps [former vice-president] Joe Biden, who would be sort of a front-runner, to a whole host of people: mayors, senators, congressmen, governors. They see an opportunity.”

In the meantime, he says, a Democrat-controlled House would likely lead to a slew of subpoenas “flying down Pennsylvania Avenue towards the White House, the intensity of that will be something to see”, depending on the outcome of the ongoing Mueller investigation into possible links with Russia.

Then, little would happen on the policy or legislation front until the next presidential election. “It will be basically stalemate for two years.”

The Kennedy Summer School runs in New Ross from September 6th to 8th and the full programme of speeches, symposia, interviews, panel discussions, film screenings and social events is at kennedysummerschool.ie.