1993: Chinks of light appear in a dark year of the Troubles

The year saw assassinations, the Warrington bombs, and Hume-Adams dialogue 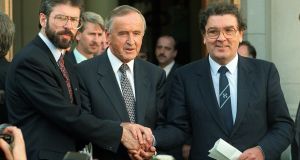 This week the Public Record Office of Northern Ireland (Proni) is releasing files mainly relating to 1993 as a result of a decision by legislative order of the Northern Ireland assembly in 2011 to move from the 30-year to a 20-year rule for such records. This involves two releases of files each year – in August and December – to facilitate the new policy.

Of those issued this month, 527 are fully open while a further 227 files are subject to some blanking-out. Thirty-five files remain closed, mainly dealing with individual prisoners and Honours. The files may be inspected by the public from today at the Public Record Office, Titanic Boulevard, Belfast.

The year 1993 was one of the darkest years of the Troubles, with IRA explosions on both sides of the Irish Sea and a series of loyalist assassinations. The year opened with the murder of a Catholic man and his son by the UVF in Pomeroy, Co Tyrone, on January 3rd. In February the British prime minister, John Major, met US president Bill Clinton in Washington and opposed Clinton’s pledge to Irish America to appoint a “peace envoy” to Northern Ireland.

In March two IRA bombs in Warrington killed three-year-old Jonathan Ball and 12-year-old Timothy Parry and injured 56 people. Later that month the UFF shot dead four Catholic building workers in Castlerock. One of them was later claimed by the IRA as a member.

On April 10th, the SDLP leader, John Hume, and the Sinn Féin president, Gerry Adams, met in Derry. They later issued a joint statement saying “the Irish people as a whole have a right to national self-determination . . . The exercise of self-determination is a matter for agreement between the people of Ireland . . .’

In June 1993, the Irish president, Mary Robinson, faced a storm of protest by shaking hands with Gerry Adams at a function in west Belfast. On June 26th, Brian McCallum, a UVF member, was fatally wounded when a grenade exploded during a disputed Orange parade in west Belfast.

In July, Major secured unionist support in a confidence vote over the Maastricht Treaty, leading to rumours of a pact between unionism and the British government.

In September, Hume met Major in London and later declared that he did not “give two balls of roasted snow” for critics of his talks with Gerry Adams. On October 22nd, the SDLP leader declared that the Hume-Adams talks offered “the most hopeful chance of lasting peace” and called on the two governments to “hurry up and deal with it”.

On November 28th, it was revealed that the British government had had a secret channel to the IRA for three years.

On December 15th, 1993, the Irish and British leaders issued the Downing Street Declaration in which London said it had “no selfish strategic or economic interest in Northern Ireland”.*

The death toll for the year from the Troubles was 84.

Dr Éamon Phoenix is a political historian, broadcaster and journalist. He is a member of the Taoiseach’s Expert Advisory Group on Commemorations

*This article was amended on September 4th, 2018, when a comma was removed from the penultimate paragraph. The Downing Street Declaration states that the British government has “no selfish strategic or economic interest in Northern Ireland”.